A personal view by Alex Langstone.
Part 1.
I have been involved in paranormal investigation and psychic questing for over 20 years, and during that time I have experienced many things that I would perceive as being paranormal in origin. Originally a confirmed believer in my twenties, then for many years a complete sceptic, in recent years I have learned to just accept the many strange and unusual things that occur, as I now firmly believe that trying to prove that paranormal phenomena exists is a fruitless and in many ways a pointless exercise.
There has been absolutely no scientific move forwards within parapsycology for many years now. The scientists just continue to be sceptical and obstructive. They dismiss everything as either coincidence or as having a normal origin (as opposed to a paranormal one!) I therefore want to put forward this article about the “Orb phenomenon”. It is just my opinion, and has absolutely no scientific basis at all.

Since we do not know what orbs truly are, it just seems that they are to be found mainly in areas where there is or has been paranormal activity. In my experience on an average paranormal investigation or field trip there are about 10 people using 10 different cameras, 35mm and digital, and many speeds and brands of film. They all get their film developed at separate places. Let's say only about half of these people get some orb photos. Are these water spots or dirt on the lens? That would mean that 5 people all had similar dirt on their lens and all 5 did not clean their lens either. Are these orbs film processing errors? Well the 35mm cameras probably had their film developed in different locations and used different film so that is unlikely. The digital cameras don't have film-processing errors, for obvious reasons!

I am aware that some people feel that the orbs on a digital camera are an error in the digital processing of the image. When that error does occur in digital photos, the objects tend to be square in nature, not round and they cannot be semi-transparent, the pixel behind would have to be corrupted also.

So what about dust and dirt being stirred up? Can that be the cause of the orbs? Well possibly some orb photography can be explained away as dust, but if that were the case always, I would tend to think that there would be lots of orb photos in a sequence of photos from the same camera and location. In my experience, this is not the case. All of the shots in a sequence should have the dust or dirt in it, and therefore orbs in the photos too! I have found in the majority of cases that orb photos do not appear in consecutive photography. All photographers present in a n investigation should get orbs if it is dust being stirred up. So what are Orbs?

One popular orb theory is that the orb is the energy being transferred from a source such as power lines, heat, batteries and so on. Energy like a globule of water in zero gravity is drawn together to form a sphere. Orbs may also have something to do with human bio-energy and may be an effect of the energy of the aura. I have certainly seen orbs around people's heads on the odd occasion, both using photography and whilst giving healing. Another theory is that they could be ghosts beginning to manifest, or spirit entities of the sites being photographed, or some other unknown energy or paranormal presence. Alternatively they could be produced by light reflecting off water droplets, dust or insects. Nearly all of the orb photos I have in my collection have been caught at special places of spiritual significance or at a sacred sites in the British landscape. So lets have a look at some of the photographic examples and see if we can work out what may be happening?

This photograph was taken on the 29th September 2006 on the shore of Lake Bassenthwaite in Cumbria. It was a dull afternoon, but the flash was turned off. Are they water droplets falling from the tree? It had been raining, so maybe. Orcould they be something else? Perhaps we have captured the life energy of the tree itself or the spirit of place beginning to manifest? It is for you to decide. 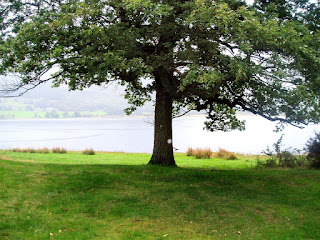 This next image (right) was taken the same afternoon at the same site, but under a different tree. It shows myself, and psychic and researcher Carole Young. We were in the area taking photos for my book Spirit Chaser. Was the orb caused by water, or was it something paranormal? 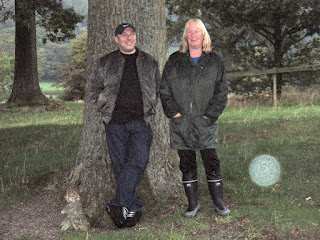 The image (left) of me and my partner under the same tree (as second image) taken four minutes later than the first image. (We had taken other photographs between these t 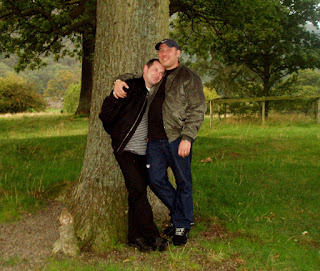 wo, which showed no orbs at all). The orb appears to be very similar to the first one, and markedly different to the larger one taken one minute before this image in the same location. What is going on then? We were all just mucking about taking snaps after a busy few days of more serious photography. I have been to this location many times, and never before have I caught a single orb on camera here, despite having taken many photographs of the area. Also it should be noted that much paranormal activity has been recorded over the years at this site, this will all be made public in my new book Spirit Chaser, which will be out soon. 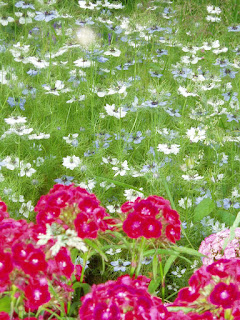 The next image was taken in a friends garden in Somerset on 17th June 2005 at 6.25 pm. It was a sunny evening, and we were just relaxing in the sun both before and after the photograph was taken. Jane, who's garden it was, had just told us that she felt sure that this area of her garden was where the garden elementals lived. It should be said that Jane is a psychic and a healer, and is very open to strange phenomena. However we didn't expect to capture anything on camera, but were delighted when we did! Can anyone explain what may have caused this one, or is it a horticultural paranormal experience?
This image was taken at the ancient holy site of Madron Celtic Baptistry, Boswarthen, Cornwall on 16th July 2005 at 11.09 am. Again it was very sunny. I was on my own, and nothing was seen in the well chamber before the photo was taken. This is the only double orb that I have in my collection. And the only photo I have seen where two orbs overlap. 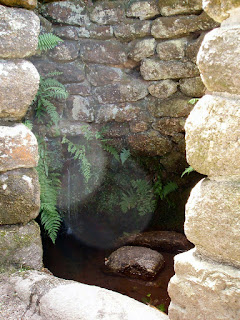 I will post another article and more interesting photo's on this site in due course. Including orbs that have seemingly appeared to order, and an orb that seemed to open the fabric of time and space itself. Watch this space folks!