The 197ft (60m) long ribbon of stones, found in Rotherwas, near Hereford, is thought to date from the same period as Stonehenge, roughly 2000 BC.

County archaeologist Dr Keith Ray said as far as he is aware the stone feature is unique in Europe.

"We can only speculate it may have been used in some kind of ritual," he said.

The Rotherwas Ribbon, as it is being called, is made up of a series of deliberately fire-cracked stones and appears to have been deliberately sculptured to undulate through the whole of its length that has so far been uncovered.

"This is an exciting find, not just for Herefordshire and the UK, but apparently, so far, unique in Europe. It has international significance," Dr Ray said.

Archaeologists said although the practice of laying stones in small level pavements is known at sites in Pembrokeshire and elsewhere, the closest parallel to the Rotherwas Ribbon is the "Great Serpent Mound", in Ohio, USA, which is thought to have been built between 200 BC and 400 AD.

The above was reported earlier this month and once again raises some important questions about road building, archaeology and our national heritage. This find surely has to be one of the most important recent finds in Britain? So what are they going to do? Bury it! Please visit the links below to help save this important site.Click here to sign the online petition now. http://petitions.pm.gov.uk/rotherwas/

Golowan: The Feast of St John
a personal review by Alex Langstone 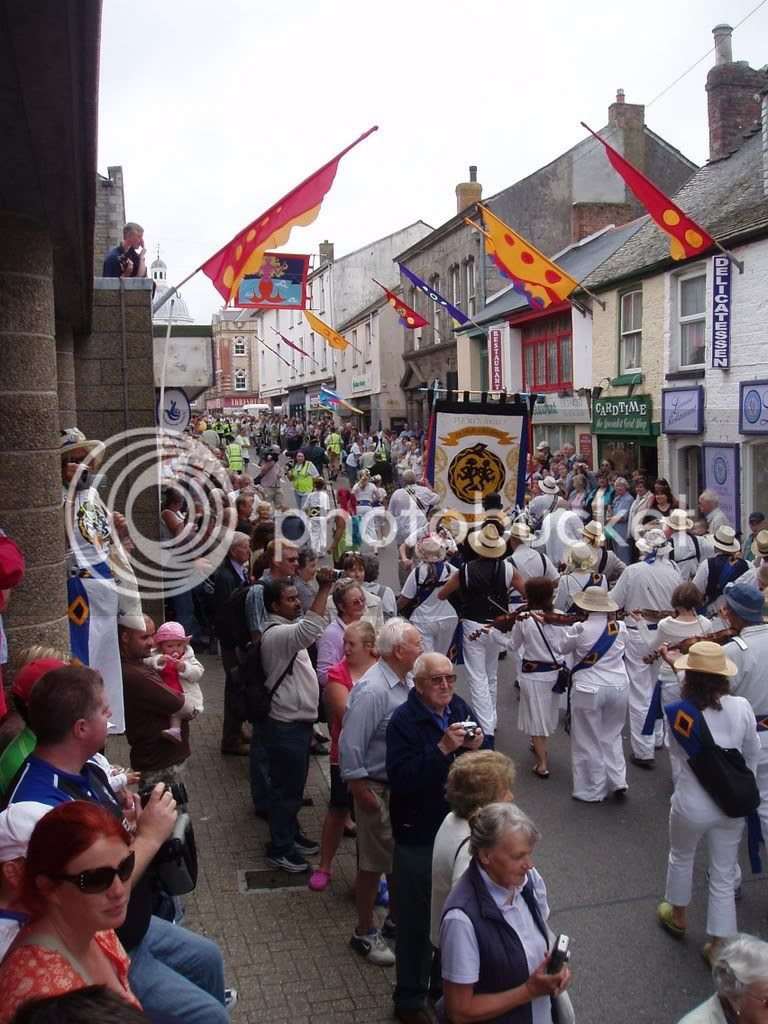 FESTIVAL HISTORY
Golowan, the Feast of St. John, is one of Britain's greatest annual arts festivals, a bubbling cauldron of traditions thrown together in glorious chaotic revelry! Pagan Celtic traditions dance along side traditional civic pomp. Christian worship blends with the colourful and iconic street parades of Mazey day, and Penglaz (the grizzly headed 'Obby 'Oss of Penzance) leads the midnight serpent dance in celebration of the newly elected Mock Mayor of the Quay. This week long folk festival of music, dance, theatre, storytelling and film culminates in a two day spectacular weekend event. Saturday is Mazey Day, which in local dialect means a bit dazed and confused, and you will be after joining in! Sunday sees the traditional Quay fair day, where the sea is the focus and many activities are centred around the promenade and historic harbour and docks. The Cornish Fire Festival of Midsummer's Eve is generally acknowledged to stretch back to pre-Christian times. Originating as a festival of fertility and sun worship at the time of the summer solstice it owes its survival, in part to its Christian association with St John's Eve thus the name Golowan (Gol feast, (J)owan John). Its continuation as a living tradition into the 21st century is thanks to the efforts of the Old Cornwall Societies who hold bonfire ceremonies on ancient hill tops the length and breadth of Cornwall on Midsummer's Eve. References to the bonfires and Midsummer celebrations can be found in Bottrel's "Traditions and Hearth side stories of West Cornwall" (published 1870). For the town of Penzance, this time of year holds special significance as the town's patron saint is St John the Baptist, and the towns seal depicts the severed head of St John on a platter! For anyone walking around the town this seal can be seen on top of many of the directional signs.

Cornwall is one of the few places in Britain where the ancient observances of the summer solstice are still honoured as mainstream. As the last glimmers of the setting sun light up the western ocean, glimmers of light flicker; sacred fire beacons blaze upon hilltops from Lands End in the far west to Kit Hill on the Devon border. These bonfires are a celebration of the Summer with the sun at its strongest. Believed to be Druidic in origin, the ceremony is spoken in Cornish, and climaxes with the Lady of the Flowers casting into the now roaring flames a bunch of summer herbs. Festivals in Cornwall celebrated the Summer Solstice as the wedding of Heaven and Earth. Goddess manifests as Mother Earth and God as Sun King. Bonfires were lit to celebrate the Sun at its height of power and to ask the Sun not to withdraw into winter darkness. Midsummer Eve festivals in the countryside of Cornwall, would have firelight shining from every hill and peak. Dancers adorned in garlands and flowers jumped through the tall flames. This ancient Cornwall Summer Bonfire tradition has been revived during the 1920's and is still a popular festival. The spiral is a symbol associated with the Solstices and creation by the patterns of sacred geometry. Ancient dances follow the Sun's movement like a spiral. People joined hands weaving through the streets, winding into a decreasing spiral into the middle then unwinding back out again. The Sun moving from contraction at the centre of the spiral at winter solstice to expansion at Summer Solstice and back again. Midsummer is truly a celebration of the primal creative force of the universe. God at the peak of His powers and Goddess in Her manifestation as the Mother.
Here in Penzance the week long celebrations of Golowan festival culminate on Mazey Eve, where the town spills onto the streets in party mood. Fireworks are set off at the sea front, and as midnight approaches, crowds gather by the docks to help the Golowan band entice Penglaz, the grizzly headed 'obby 'oss from her stable with music and dancing! Penglaz then leads the mysterious serpent dance through the ancient streets around the docks. This chaotic dance runs well into the small hours and is great fun to be a part of, as it sets you up for the following days festivities of Mazey Day. 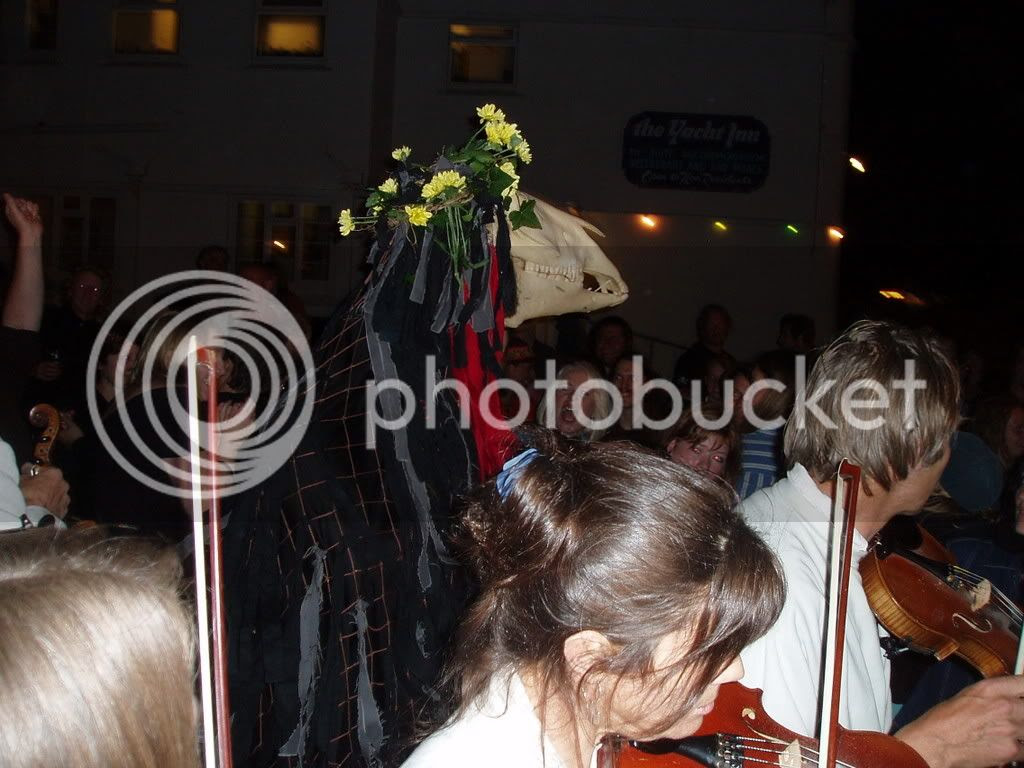 PERSONAL FESTIVAL
Saturday 16th June.
This years festival got off to a quieter start for Paul and I as we attended a performance of Rachmaninov's Russian Vespers. Performed within the somewhat austere surroundings of St Mary's neo-gothic harbour side church, by Truro Cathedral's Three Spires Singers. Stood beneath the stunning and colourful east window depicting Stella Maris, the choir sang beautifully, and despite the somewhat dilapidated interior of the church, their voices soared taking the audience to a more sublime place!
In the first two months of 1915, when he wrote Vespers, Rachmaninov was 41 years old and internationally famous. He led the hectic life of a touring piano virtuoso and a composer whose popular piano works were known all over the world. Restricted in his movements by the war and wanting to do all that he could for his disunited and threatened homeland, Rachmaninov turned to Russian liturgy and chant. In composing Vespers he created both a devotional masterpiece and a powerful statement of Russian nationalism.
Vespers, as a service of evening prayer, is observed in many Christian churches. The Russian Orthodox church went further and held an "all-night vigil" before major feast days, beginning at 6 pm. on Saturday and ending at 9 am. on Sunday. By Rachmaninov's time this was done only at major monasteries, and the liturgy of the all-night vigil had been condensed into a three hour service on Saturday evening. Rachmaninov titled his work All-Night Vigil, but Vespers is also an accurate title. Rachmaninov's great liturgy ranks among the highest achievements in the history of Russian church music.
Friday 22nd June.
Mazey eve saw us out and about around the harbour and seafront for the annual "summer fire" fireworks, which we observed from St Anthony's Gardens situated on the promenade. This area of the town is the heart of Golowan, with the funfair and festival marquee both close by. Nearby is the Dolphin public house which sits directly opposite the docks, and it is here that after the fireworks, crowds gathered to witness one of the towns more obscure and mysterious attractions. At the stroke of midnight the Golowan band's pipes, strings and drums stirred in a repetitive and catchy Celtic refrain. The crowd's excitement continued as we all tried to entice Penglaz from her stable. At once the stable door opened and out of the darkness appeared the skeletal form of Penglaz. Dancing, teasing and snapping her jaws she leads the crowds around the ancient maze of narrow and cobbled streets, under the pale and tantalising light of a half moon. 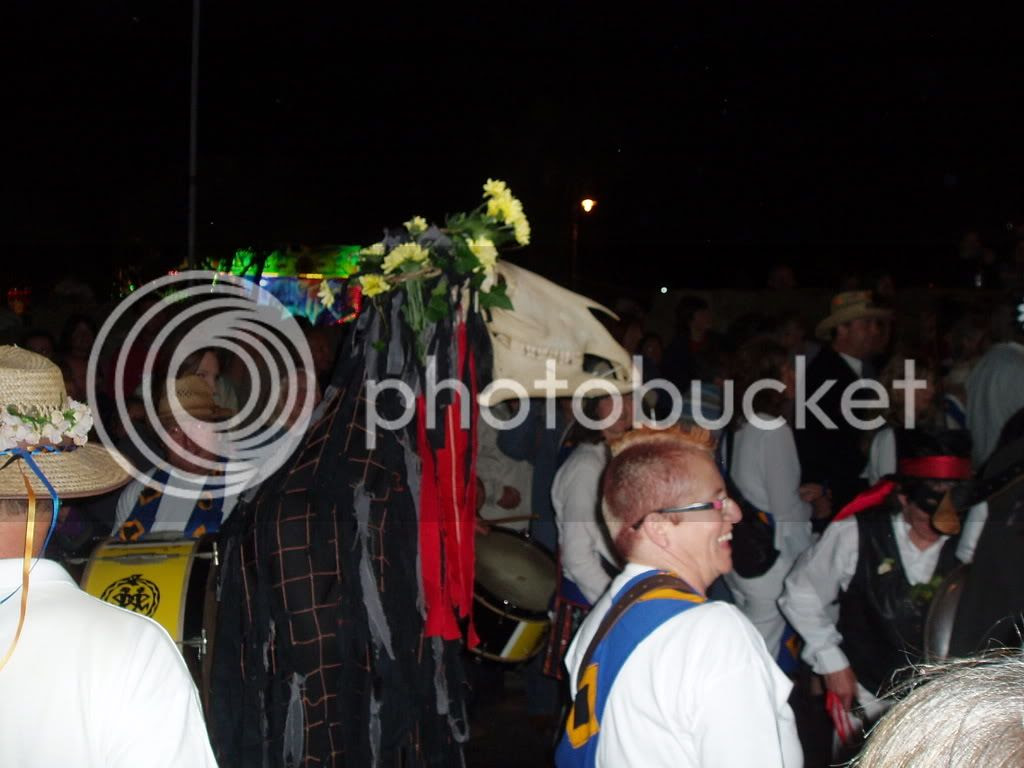 Penglaz, is the towns midsummer 'Oss of fertility, always crowned with a posy of flowers and decked in greenery, she is at the heart of the ancient festivities. Many other towns in Britain have 'Obby 'Oss days. Notably at Padstow, in Cornwall and Minehead in Somerset who both celebrate their days on Beltane (May Day). Interestingly another very similar 'Oss can be found in South Wales in particular in Gwent and Glamorgan. Mari Lwyd (meaning Grey Mare) is, like Penglaz, a skeletal 'Oss, but whereas Penglaz is a midsummer tradition; Mari Lwyd is celebrated at midwinter! Mari Lwyd can still be seen today at Llangynwyd, near Maesteg, every New Year's Eve. The Llangynwyd celebrations also include a torch lit procession around the village.
This years Penglaz led Serpent Dance was the busiest I have ever seen. There were so many people wanting to join in, that the whole dance ground to a halt several times! Everyone involved seemed to be enjoying themselves though, and Paul and I had a great time.
MAZEY DAY. Saturday 23rd June.
This years Mazey Day was as colourful as always, but seemed busier than ever before; proving the popularity and increasing interest of all things Cornish and Celtic. After hearing the addresses given by the Mayor of Penzance and The Mock Mayor of the Quay (who was elected the previous night at the "Mock Mayor Elections" held in the festival marquee), the festivities began. Many local school children took part in three different colourful parades through the town centre, and the streets were lined with stalls selling local produce, crafts and music. Many musicians gave free and impromptu performances around the town, we witnessed many sounds from across the globe including native American fusion-folk by Pachamerica, the exotic beats and rhythms of Pensamba, the musicians and dancers of Tatters Border Morris, the pipes and drums of the Mid Argyll Pipe Band, the Acorn choir and many others. 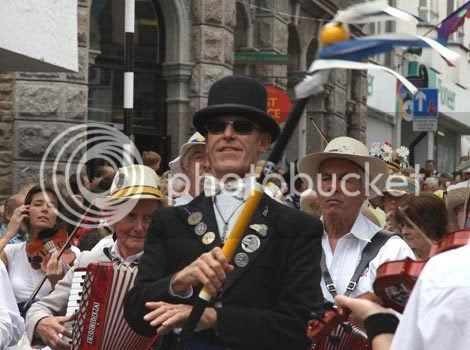 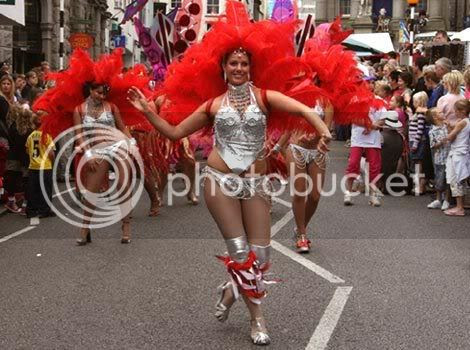 In the festival marquee local bands played through the afternoon, warming the place up in readiness for the main marquee event, when later that night the African beats of Lolou, an 8 piece Senegalese band took the stage for a fantastic and lively concert. 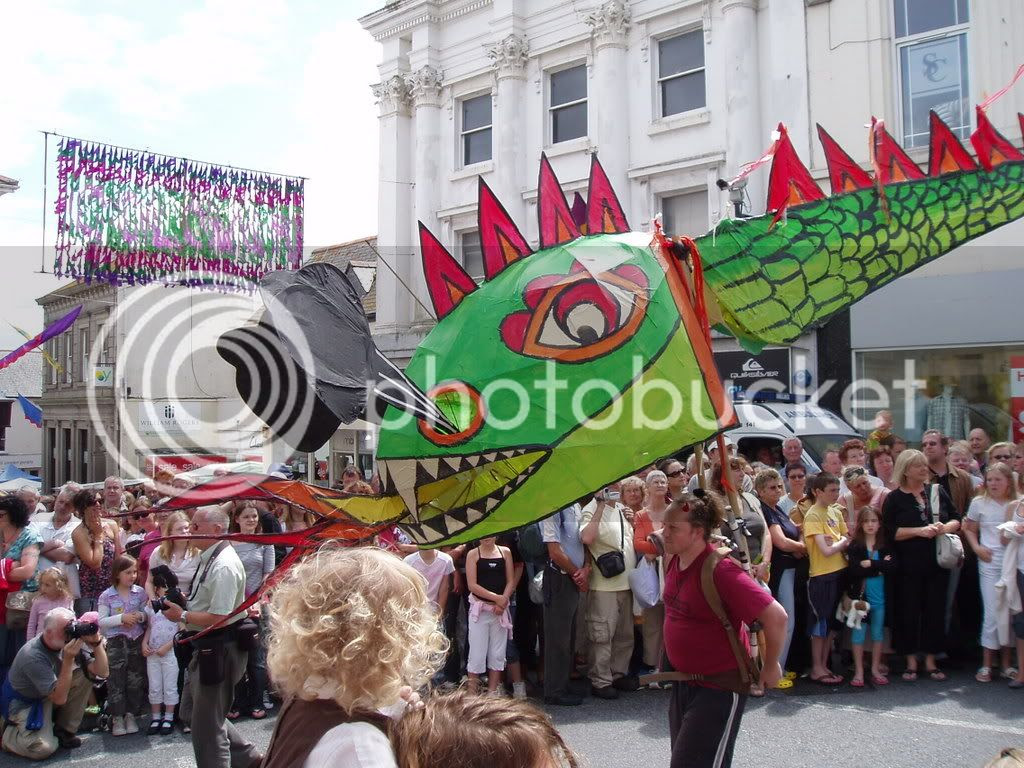 Mazey Day was a truly amazing day, with a real cosmopolitan feel. And from it's Celtic roots; the wider festival of Golowan has become a cultural melting pot of pure pleasure. From the Cornish Serpent Dance, to the sounds of Scottish pipes. The chants of native Americans to the folk music and dance of English Border Morris. The soaring and ethereal sound of Rachmaninov's All Night Vigil to the beats and bass lines from Senegal. With jazz, silver bands, classical and rock music all thrown in for good measure Golowan and the people of Penzance have come up trumps with this fantastic community festival. But don't take my word for it, come see for yourself next June!
2 comments: