Glimpsing the Green Man of England

A Wander Through the Proverbial Thicket in Search of the Foliate Face of the Wild Wood!
by Alex Langstone

This article focuses on some of the lesser known green men carvings in England, along with curious anecdotal information on some of the locations. The article is partly based on the excellent series of articles that folklore expert Ian Dawson published in Albion's Sacred Heritage (ASH Magazine) during the 1980s.
Whether you define the Green Man as an archaic god, the pantheistic face of nature, the Spirit of the wild wood, the green face of re-birth or an arcane folk-inspired pub-name, he is all around us. Peering down from the rooftops of the great Gothic Cathedrals, from the corbels of the country parish church, from brightly-painted old English pub signs to the ancient heart of the gnarled and twisted oak trees of our woodlands. His face is there, spewing the foliage of the forest from within, from every orifice it emerges: eyes, ears, nostrils and the mouth, it is as though the foliate face of the green man is actually part of the tree itself! 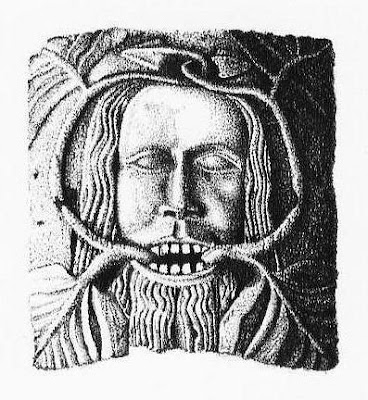 For here we go on a journey, a journey to visit some of the more obscure and unusual Green men carvings around England. We start in the west, and in Devonshire where one of the most sublime foliate faces is to be found at the Sampford Courtney parish church of St. Andrew. This sacred building was rebuilt in the mid 15th century and the carving dates to this period. It shows a lovely bearded benign face spewing leaves from his mouth. Some commentators have likened the face to Christ, and it does have those classic features of Christian iconography to a certain degree, as you can see from the image (left). The church has other interesting carvings including the tinner's rabbits, and the sow and piglets, along with two other green men. 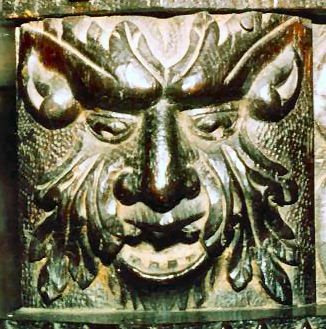 From here we venture to the pretty Somerset village of Spaxton, where in the centre of the village lies a newer chapel once famous for the Victorian cult of the Agapemone based on the vision of Rev.Harry Prince, an Anglican priest, who left his church as he believed that the holy spirit had taken residence within his very own body. Here he built a religious community including a chapel. It was here that the defrocked Rev. Henry Prince set up his community of "soul brides" inside the perimeter of a 12 foot high wall and ferocious guard dogs. This community was remarkably successful in its time. Though they did court the expected "moral outrage" from the popular press, but many of the locals grew fond of their village cult, and some of the older villagers still remember some of the cult members.
Spaxton is nestled upon the edge of the stunning Quantock Hills, overlooking the shimmering Bristol Channel, St Margaret's dates from the 13th century and has three green men, two on the font and one of a bench end (right and below). It is a very peaceful spot, and the superb views across the rolling countryside of west Somerset are breathtaking. The nearby village of Enmore has it's own virtually unknown green man in the parish church carved on a pillar in the north aisle.

Moving now from the west to the far east of England, and to a land very different from the west country. This landscape is of the East Saxons, virtually nothing visible remains of any earlier Celtic settlement, and the ancient Celtic kingdom of Trinovante. But an Anglo-Celtic 7th century chapel does still exist at Bradwell-on-Sea, and glimpses of Celtic mythology blend with Saxon and Viking legends and myths, to form a heady mix of folklore and secret Witchcraft traditions that live on to this day in the more remote spots along the lonely coast or deep within the gently rolling and wooded rural countryside. In this part of England there are many virtually unknown green men carvings, which may hold clues to the ancient past, when the landscape was dense woodland. Essex folklore researcher Ian Dawson has done much work on cataloging these eastern foliate faces in his excellent series published in ASH Magazine in the 1980s and early 1990s.

One of Ian's greatest discoveries was during a visit to St John the Baptist church at the Thames-side village of Mucking. The former parish church has been in private hand for many years now, but Ian was lucky enough to view the inside whilst the builders were there during the spring of 1989. What Ian found was truly remarkable. He was searching for a green man carving he had read about. Situated on the south side of the chancel, which dates to 1216, on a central pillar is a stone carved green man spewing branches from his mouth. Immediately opposite him, on the other side of the pillar among the foliage is an exquisite carving of a green lady/moon goddess, with a lunar crescent upon her head and horseshoe supporting her chin. Her head is surrounded by a perfect circle which appears thicker on the right hand side as you view her; looking like a shining crescent of the waxing moon! I sincerely hope that these unique carvings have survived in these intervening years, and I understand that the church is still a private dwelling.

Dave Hunt's drawing of the Goddess and the Green Man of Mucking, Essex


From Mucking and the lonely marshes of the Thames estuary we travel north towards the low rolling chalk hills of rural north-west Essex. Here the ancient settlement of Thaxted nestles in the unspoilt countryside. The town is justly proud and famous for it's Morris Dancing folk tradition, revived in 1911 by Conrad Noel, vicar of Thaxted. During the summer months dancing regularly takes place around the town, some of which truly seems to evoke the spirit of the green man. The annual Thaxted Morris Ring meeting is held on the first Saturday after the Spring bank holiday and includes many traditional dances including the magical twilight Horn Dance.

English composer, folk-song collector and mystic Gustav Holst lived here between 1917 and 1925, and he played much music in the very spacious and lavishly carved hilltop church of St John the Baptist, a 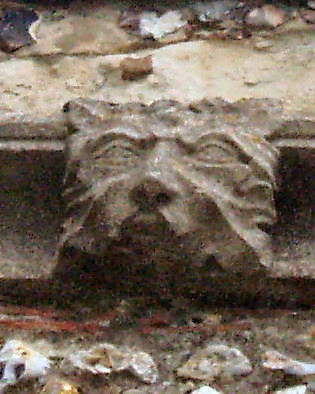 mong the many green men peering down from above. Holst became good friends with Thaxted's controversial socialist and folklore collecting vicar of the time Conrad Noel and the two men would have often discussed the folklore and traditions of the district, along with socialism and mysticism, interests which they both shared. I am sure they would have been aware of the green man as a potent glyph of English mythology, peeking out at them from around the church!


The first of these Thaxted green men can be seen in the north transept. 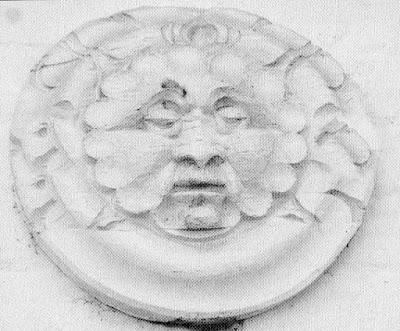 Behind the organ is a richly carved panel where four green men can be seen. On the opposite side of the building on another carved panel can be seen another green man. Another foliate face can be seen on a boss high up at the west end of the nave roof (right). Moving to the the exterior of the sacred building and inside the south porch there is a beautiful green man with great clusters of leaves sprouting from his mouth and head and further along the south wall high up near the guttering another foliate face can be seen on a panel (above left), along with other carvings of Celtic style heads and animal motifs, including a boar and a hare. Thaxted and her church are truly remarkable places to visit with mystery and magic around every conceivable corner! 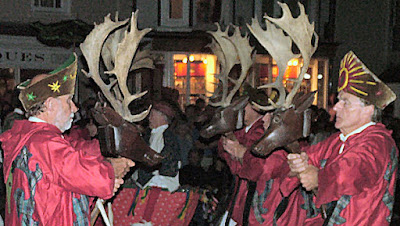