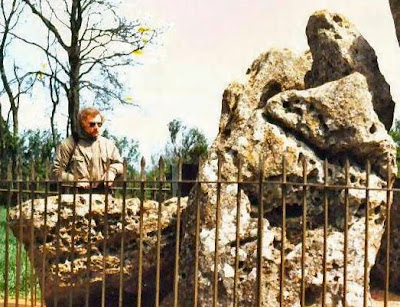 Friend and mentor across time and space.
A tribute by Alex Langstone.

It is with great sadness that I can report the death of ASH magazine founder Dave Hunt. Dave was a stalwart of the Earth Mysteries and Occult communities in the south-east and his encyclopedic knowledge of folklore and mythology was outstanding. He spent many years researching landscape mysteries and legends around Essex, a county he loved.

Dave was born in 1941 in Mevagissey, Cornwall and he always loved exploring the British landscape. Indeed in 1993, we spent time researching an alignment of ancient sites across south-west England, which was eventually written up as The Eucharist of Osiris, and published in The Lighthouse volume 2 number 1.

But it was in 1985 that I first met Dave. I was a keen and enthusiastic 20 year old, wet behind the ears, but fascinated by esoteric subjects and eager to learn. Dave took me under his wing, and over the months and years that followed I learned much. Dave had a great way of passing on knowledge, and I shall always remember with affection, the years we studied together, and the way Dave always encouraged and supported me. He was the key player in the publication of my book Bega and the Sacred Ring, and without his valuable support I doubt if it would ever have been published!

His esoteric legacy spreads far and wide. Dave worked alongside many within the esoteric community. He was a student of 20th century occultist extraordinaire William G. Gray and was an adept of the Craft of Cunning. Dave worked with Andrew Collins during the early Earthquest group, where he helped Andrew research the Running Well Mystery. He later helped Andrew again in the search for the seven swords, by finding the sixth Meonia sword in Tintagel, Cornwall. This episode has been immortalised in chapter 45 of Andrew Collins' psychic questing classic The Seventh Sword. The chapter is entitled Morgana Awakes and absolutely sums up how I will always remember Dave.

Dave Hunt co-founded ASH magazine, along with myself, Ian Dawson, Claire Capon and Jim Kirkwood, and under his leadership he encouraged us all to write and lecture about what we had researched. He remained with the magazine until its demise in the spring of 1997. He also helped host two very successful ASH magazine Esoterica conferences and was fundamental in the organisation of the ASH Wednesday public meetings, held during the mid 1990s. He was an active member of the Leigh-on-Sea based Temple of Isis Iseum, during the early 1990s and a valuable guiding light, teacher and mentor in the Clan of the Trees. Dave's biggest legacy though was his research. He spent years researching the Essex Landscape Zodiac, and I sincerely hope that someone, somewhere has this document, and that it will one day be published. I recall spending many happy hours out in the field with Dave, whilst he checked and re-checked the maps and the landscape for clues to the elusive geometry of the Zodiac, and he gave many excellent lectures on this subject.

I am very fortunate to have in my possession some of Dave's work, and it will all be published in due course.

The thing that will always stay with me most of all was Dave's infectious sense of humour. Many times I recall situations that needed the lightness of his humour and he always made everyone laugh, and this was one of the joys of belonging to some of the groups he was a part of. Dave was a wise soul, who would tell it as it was! He will be sadly missed in the communities he served.

Below is a poem from an early issue of ASH, that Dave wrote. I can recall talking to Dave about it at length at an editorial meeting, where it caused much discussion. It is a particular favourite of mine and seems a fitting conclusion to this obituary.
2 comments:

In the hours between the hours when day has
died and night not yet begun
and this old Earth is made to sigh by Autumn's dim
and dwindling days,
over hills and vales made mellow by the mists and
setting sun.
The Mother of the mystery walks her secret ways.
As old as time, and born of time itself She passes,
quiet, stealthy and unseen.
Shuddering with the cloying cold that surely
soon will come.
Making Summer's sun and warmth a half
remembered dream.
And as She passes, with caressing touch, She
plucks the life from all She does survey
and drops it, gently as a falling leaf, into
a basket made of dark decay.
Over all the land She wanders, dogged by
shades of darkness and of fear,
pausing for a while at homesteads locked
against the Crone,
to scratch at door and window or to
freeze the child's tear
who hears her in the chimney softly
moan.
When She has passed the land is
locked in Winter's sere and snowy hold.
The now dead sun hangs like a pearl in
the pewter bowl of sky,
yet folk in Albion, huddled round the
fires against the cold
quietly wait to hear from far a future
Child's cry.

Written in 1989, and originally published in ASH magazine no. 3.
No comments: