Some Folklore from Tintagel

Some Folklore from Tintagel
Alex Langstone

The folklore of Tintagel is dominated by King Arthur, and Geoffrey of Monmouth was the first to document the Arthurian connection with Tintagel in his History of the Kings of Britain (Historia Regum Britnniae) which was written in the 1130s. The Castle, built by Richard, Earl of Cornwall, in the 1230s is also connected, within the tangled web of folklore, to the legendary tales of Tristan and Isolde, as the castle at Tintagel was also the seat of King Mark. My favourite piece of ‘Arthuriana’ in Tintagel is the indentation in the clifftop known as King Arthur’s footprint, where the Victorians claimed that Arthur, as a giant, could stand one foot on the ‘footprint’ and another in the churchyard of St Materiana on the opposite cliff. However, there is much more to the folklore of Tintagel than King Arthur.

Tintagel has its very own sea serpent. In September 1907 the Aberdeen Journal reported a sighting of a sea serpent by the Rev. T. C. Davies of Sheffield and Mr E Dodgson, Chaplain at Jesus College Oxford. They first sighted the creature about 11.45.am on September 12th. The report came in a letter to the Western Morning News. They were seated on the edge of the cliff at Gullastem when their attention was drawn to a black object moving very quickly along the surface about 200 yards away towards Tintagel Head. In view for about a minute, the serpent was at least twenty-foot-long, and was holding its head above the water which appeared to have a large mane upon it. The two witnesses rued that they had neither a telescope or a "Kodak to take its likeness”.

The tales of some of the charmers and conjurors of Tintagel and district are of great interest and one such charmer was called ‘Old Martin’, who was practising his craft in the village in the early part of the twentieth century. He would cure warts using an absent treatment charm, where all he would ask for was the name of the affected person. The warts were invariably gone within a week. He would never accept payment for his services and he continued the old tradition of never being thanked for his treatments as this was widely believed to render the charm useless. He had an interesting charm for curing sprains. He would take hold of the injured limb and say -

“As Our Saviour went over God’s bridge; he caught his toe in a stone and got a sprain. Then comes Peter who stretched it out, bone to bone, sinew to sinew, skin to skin. I hope every drop of the blood in thy body will run, in the name of the Father, the Son and the Holy Ghost”

‘Old Martin’ also had a charm to cure boils. The spell was recited over the patient, using his or her name

“(Patient’s name), three angels came from the west. One had fire; the others had water and frost. Out Fire! In Water and Frost! In the name of the Father, the Son and the Holy Ghost.”

Another charm, this time from 1930s Tintagel, gives instructions on how to cure ringworm in humans. Take half a crown and encircle the ringworm three times opposite the sun. The ringworm will dry and eventually all infected skin will fall away leaving clear new skin. 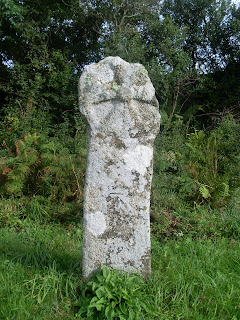 Fenterleigh Cross, Bossiney
There is an interesting account which reveals that several witch bottles were discovered underneath an old wayside cross at Bossiney in the 1880s. The antiquarian writer, H. Michell Whitley wrote about this discovery in Devon and Cornwall Notes and Queries Vol 2, 1921 –

When on a walking tour through North Cornwall about forty years ago I stopped to sketch a wayside cross near Tintagel; and was told by the farmer of the adjacent land that it was overthrown some time ago, and on setting it up again, he found several bottles full of water, and with many pins in them, buried around its foot. On inquiring the reason of these bottles being buried, I was told at Boscastle that "If you are ill-wished you must take a bottle, fill it with water, and put some pins in it, cork it tight, and then bury it. at the foot of a holy cross; and the ill-wish will fall on the person who ill-wished you.

This is likely to be the cross at Fenterleigh, as this has been moved at least twice. According to Andrew Langdon in his book Stone Crosses in North Cornwall, the cross was standing by a hedge in the 1860s with only the front visible. According to Whitley’s account, it must have been moved by the farmer that he spoke to, circa 1880. This was when the witch bottles were discovered by the farmer. The monument has been moved again, more recently, due to road widening. However, according to Andrew Langdon, it remains close to its original position, at the cross roads, marked by the nearby field name ‘Cross field’.

First published in Meyn Mamvro No. 92 Winter/Spring 2017. Text taken from my recent book From Granite to Sea: The Folklore of Bodmin Moor and East Cornwall.
No comments: