So, what do the Cornish towns of Penzance, St Ives and Bodmin have in common? Well the answer may lie in a folk-tune heard around mid-summer in the aforementioned ancient and historic towns. 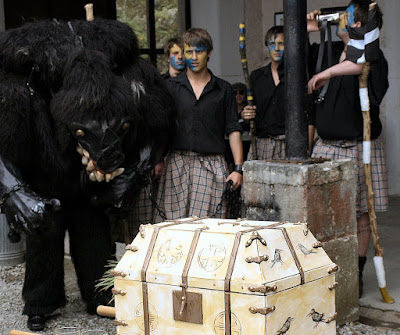 Above: the beast, helliers and the casket of St Petroc.

So with the tune's catchy refrain reverberating all around, here is a review of the 2009 Bodmin Riding ceremony The Horns of the Beast, performed at Bodmin Jail on Saturday 5th July 2009.

Bodmin Riding is a new experience for me, having recently moved to the district from Penzance. The festival offers us an unusual gateway into the second half of the year, just as Mazey Day functions as a climax at the height of the season. Bodmin Riding falls on the firs 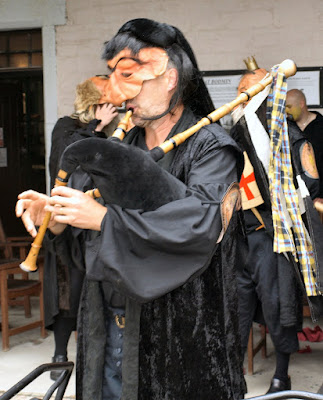 t weekend of July, and complements the previous weekends celebrations in Penzance superbly.

The Ragadaziow had gathered, and the Helliers (Cornish language "huntsman") seek the Beast around the town. They soon caught him, and the whole troupe gradually processed to the turreted and historic Bodmin Jail courtyard. The ancient bones of Bodmin's founder St Petroc lay in the old wooden chest, guarded by the gang of musicians that is the Ragadaziow (worthies of the borough).
Copious amounts of Riding Ale was consumed, and the Helliers guarded the beast, whilst An Gwary Bosvenna (the Bodmin mummers play) was performed. This unique play is a whistle stop flash through Cornish history in just 15 minutes, and draws on other traditional Cornish mummers plays, ancient manuscripts and folklore. A truly subversive celebration of the spirit of Cornwall!

Once the play had been performed, and more Riding Ale consumed, The Ragadaziow processed from the courtyard, playing the Riding tune and beating their drums. The sacred relics of St Petroc followed and behind 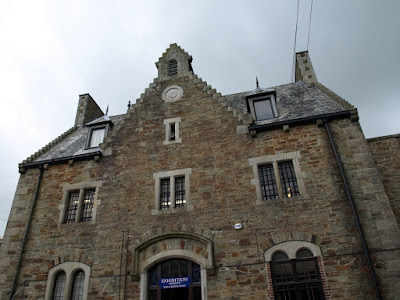 the Helliers with their chained and fearsome Beast! Members of the public joined the procession towards the town centre, where the trial of the beast would be performed, and the town's mummers play would be acted once more. It was fascinating to watch people’s reactions as the penny gradually dropped that the Beast was not a nasty monster but was in fact a totemic representation of themselves.

At the trial the modern story of the Beast of Bodmin is told along with other stories, like the legend that the founding saint of Bodmin tamed a dragon by taking a thorn out of its foot. So in some ways the beast has become St Petroc's dragon, and thus a symbolic icon of Bodmin Town.

Bodmin Riding is a unique festival, blending ancient folk-tales of the area with a fun contemporary folkish feel. The best part of the festivities surround the ritual parading of the Beast of Bodmin. True weirdness; and because of that, absolutely fantastic! 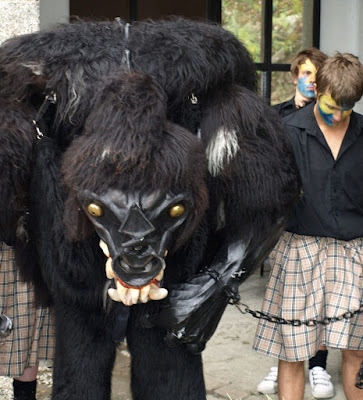 Above: the Beast of Bodmin is captured by the Helliers

Click here to read more about, and hear the Bodmin Riding tune.
See here for 2006 Video of the hunting of the Beast
Photos: Top. The Beast the Helliers and the casket of St Petroc. Right. A Ragadaziow piper. Left. Bodmin Jail. Bottom. The beast is caught! All photos copyright Alex Langstone.