Justification or Desecration - the debate continues...

Visitors will be taken back in time 4,000 years when Kings Lynn Museum re-opens to the public on Tuesday 1st April after its £1.2 million redevelopment. For on display for the first time will be Seahenge – the man-made timber circle found on Holme beach in 1998 which has been hailed one of Britain's most exciting archaeological discoveries.

A new gallery has been created to show half the 55 preserved timbers from the circle and the giant upturned oak stump they surrounded, against an illuminated backdrop of Holme beach today. 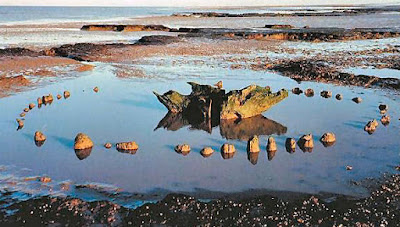 Seahenge as it was before 1998
Archaeologists faced angry protests when they started to remove the timbers in 1999 to preserve and study them, from druid groups who felt a spiritual connection to the site and local people who wanted the structure to remain in place.

Lynn Museum project manager Hannah Jackson said mystery still surrounds what prompted the Bronze Age people to create the circle. "There are tantalising clues yet we still don't really know what it was for – it's a bit of an enigma," she said.

"The upturned stump could have been like a table top on which the body of a very important member of the community who had died would be laid out for the birds and animals to pick the flesh off.

"Then they would remove the bones for burial elsewhere, and that fits in with what we know of Bronze Age burial rites," she said.

Another theory suggests the circle was an ancient calendar, as its alignment ties in with the rising sun on midsummer's day shining directly through an arched timber forming the entrance.

Either way, it was significant enough to involve 50 to 80 of our ancestors in constructing the monument as evidence has been found of more than 50 different axes being used to shape the timbers, Miss Jackson said.

The main display is mirrored by a full-sized fibreglass replica showing how the structure would have appeared when it was constructed in 2049BC, complete with a model of a Bronze Age man. Visitors can enter and explore this area.

Since excavation, the Seahenge timbers have been to the Bronze Age Centre at Flag Fen, near Peterborough, to be studied and start the ten-year preservation process, and to the Mary Rose Trust in Portsmouth to finish the conservation work. The central stump is still with the trust until it is ready to join the display.

So despite excavation, study and preservation we are still nowhere near to making any new discoveries, prompting the same old question of why remove it in the first place? Maybe a better understanding would have been reached by studying the ancient monument in its original position? Was this a justified scientific project or the desecration of an ancient site? Let us know what you think.