Divine heavenly host
Sent from above
Beyond the veil of dreams
Helena, ghostly instiller of beauty
In this green and beautiful
Valley, whence
The quicksilver river flows -
Camel of the west
Great snaking river
Moving through the
Sacred enclosure
Of your divine intervention
Landscape Sovereign of
Ancient place
The elbowed river
Travelling towards the north
Silver-singing artery of life
Running from the misty upland moor
To Atlantic rollers crashing
Against the massive darkened
Sea-stained craggy serrated cliffs
This secret celestial valley
Sanctified, soft and peaceful
Hidden site of blissful repose
Fed by the old straight track
From other places, abodes and realms
Lady of dreams
Light up the morn with
Your ancient light
Oh Lady of sunrise
Goddess of sunset
Take us to your eternal home
The secret space from
Whence you perpetually reside
By the flowing river, where the reindeer hide
In your esoteric time-spun enclosure
At the edge of the wild gorse-tangled upland
Of the arcane sea-clad Celtic fringe!
Holy Helena, treasure seeker
Truth inspirer, love desirer
Nature's finest resurrection
Autumn leaves glow introspection
Natural spirit come to me
Eternal quester, confider, jester
Nature's soul-womb eternally,
Quietly found in this
Iconic medieval landscape
By mill and trackway
You travel by half-light
Manifesting through dreams
Where once you were queen
O'er the bridge which spans
Your waterway bright
Sylvan spirit
Light of light!
The cosmic dance of river flow
Elfin track and wind strewn rain
Find us, teach us
Take us back
From whence you came -
Our landscape lady Elen ran

Through the ancient roads where life began.
Oh Helland Goddess of the
Green-track, guardian of the antlered ones
Show us your story, your mystic ray
Spreading light and joy through the endless day!

from Lucifer Bridge by Alex Langstone
No comments: 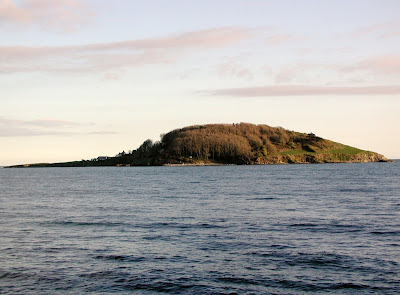 The Folklore of Looe Island

Looe Island was once central to the illicit operations of local smugglers and is home to some little known folklore and legend. The island was originally called St Michael’s Island, and an ancient chapel once stood at its summit. The folklore of the isle suggests romantic tales of lost caves and a secret tunnel linking it to the mainland. Some years ago sisters Roselyn and Evelyn Atkins, famous owner-residents of the island, received an astonishing letter from a clergyman in Cumbria explaining that he was in possession of what appeared to be a genuine treasure map, with a clear ‘X’ marking the spot. He sent the map to the Atkins sisters and for years they kept the map, eventually deciding to try to dowse the spot. They did receive some powerful indications that something was buried there and when excavated a large stone was found buried at the spot. Maybe the stone itself is the real treasure?

On the 15th of September 1900 The Cornish Times reported that a 'Remarkable discoveries at Looe Island' had been made, giving a description of the findings and promising a full detailed article in the next issue, but no such report ever appeared - fuelling conspiracy theorists and treasure hunters curiosity in what, if anything, was actually found beneath the ancient islands rocky shores.

The original report that appeared in the newspaper told the story of two young men who had become excited and intrigued with stories of smuggling and treasure whilst on holiday in Looe. Having nothing to occupy their time, these two gentlemen (Mr R. Lawson and Mr F.A. Somers) gained permission to visit the island to investigate further. What they allegedly found was described at the time as astonishing. Hidden deep underneath the island was a huge cave and shortly after this initial discovery an adjoining one was discovered, which was described as resembling the celebrated Etruscan caves at Clusia in central Italy. The investigators quickly suspected that they had accidentally stumbled on a discovery unknown to even the old smugglers themselves and it was decided to make further excavations, where the most remarkable results were obtained, according to the newspaper report of the time.

Lawson and Somers went on to describe what they had found in more detail. At a distance of about 18ft below the surface, Looe Island was nothing but an extensive ramification of caves. Everything pointed towards the fact that these caves were originally above the ground as many of the larger ones - of which there were said to be dozens - were built of brick, similar to that used on the Hannafore Estate and probably obtained from the same source. They were evidently very ancient, probably prehistoric structures, several having collapsed over there long history. The style of their 'architecture' was said to be that of a very early pre-mesopelagic or Etruscan design (around 800BC). The last paragraph of The Cornish Times article stated that further important developments were expected, and that the excavations and finds would be thrown open to the public, and that a follow up, more detailed article was to be produced in the next edition of the paper. However, this never materialised, and nothing was ever heard of these extravagant claims again. It is a complete mystery and one that has entered the folkloric records of the islands mysterious past.
The island has its own ghost stories too, though these may have been invented by the smugglers to keep the people of Looe town away. One of the ghosts is that of a dark-skinned man, seen wondering the island with blood covering his face. One of the houses on the island is reputed to be haunted by an aristocratic gentleman with grey hair and beautiful hands with very long fingers, which materialises from an ominous blue glowing light. This apparition was first documented in the mid nineteenth century and first appeared after a local dressmaker was visiting and had spent the day sitting on an old seat on the top of the island. The seat was backed by furze and had a wonderful view. However, whilst sitting there sewing, she had some very strange sensations of restlessness and unease. Some years later a skeleton was unearthed by the seat. It was the remains of a tall man with long fingers. Many visitors have reported witnessing a glowing blue light, which manifests after dark and glows eerily before suddenly disappearing, as if it was never really there.

The ecclesiastical history of the island has a persistent legend that Joseph of Arimathea visited with the young Jesus. It is said that Joseph left Jesus on the small beach whilst he traded with Cornish Tin Merchants on the mainland. It is highly likely that this legend came from the monks at Glastonbury Abbey, as the island was in its possession from 1144 to 1289, and a similar story is told of Jesus and Joseph visiting there.