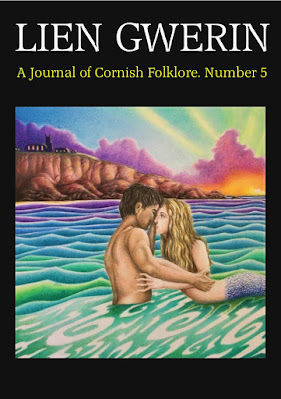 Lien Gwerin: A Journal of Cornish Folklore, number 5, is now available to order. This is another bumper edition, even bigger and better than before, featuring leading writers and artists from Cornwall and around the world. Included in this issue is a fresh look at the infamous curse of Mother Ivey, plus some of the the folklore and other mysteries surrounding the famous tidal sea cave holy well, near Newquay, and the retelling of the folktale of the Zennor mermaid. PLUS a look at the folklore of the Scillies and loads more.
Please click the link for full details on our fantastic content line-up and how to order your copy. 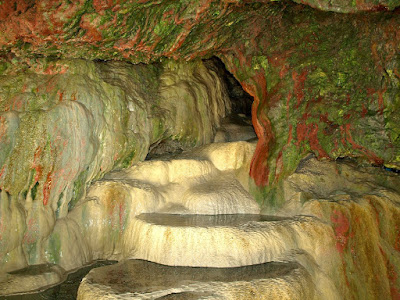 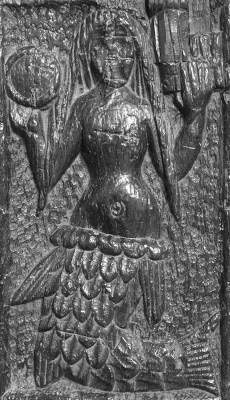 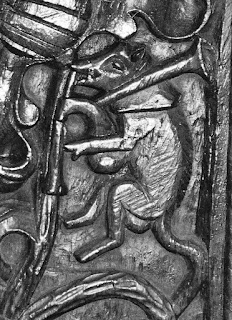 Cornish Folklore of the Wild Hunt

The Wild Hunt folklore motif occurs across Europe and typically involves a ghostly or supernatural group of hunters, horses and dogs passing in a wild pursuit, sometimes seen flying across the sky or leaping across the land. One of the earliest recorded stories of the wild hunt in Britain comes from Peterborough, was recorded during the mid-twelfth century where the ghostly hunt was described as having “huge and hideous hunters, who rode on black horses and on black he-goats, and their hounds were jet black, with eyes like saucers”

In Cornwall we have our own versions of the ghostly and sometimes demonic wild hunt.

In North Cornwall we have Squire Cheney and his hounds, who haunt the countryside around St Teath during wild and stormy weather (1)  and nearby at Pencarrow, the folkloric memory of Lord John Arscott’s seventeenth century hunt, sees their ghostly forms ride out from Pencarrow House to the cliffs around Port Isaac, and is said to end with the spectral hounds, huntsmen and horses jumping to their demise from the clifftops (2).  At Bodmin, Robert Hunt recorded a vague childhood memory of the wild tale of Hender the Huntsman of Lanhydrock(3),  and there is a tale of the wild hunt which haunts the ancient bridge which spans the River Ottery at Yeolmbridge, a couple of miles to the north of Launceston.(4)

Up on the high ground of Bodmin Moor we have Cornwall’s most famous demonic ghost, Jan Tregeagle, and his anguished howls can be heard as he is chased by the Devil’s Dandy Dogs(5) which snap mercilessly at his heels around the shores of the desolate Dozmary Pool. By day his spirit lurks within the waters, tasked with emptying the lake with a holed limpet shell. But it is by night that his true demonic force is felt, as he is chased across the tors and through the coombes with the fangs of the hell-hounds snapping at his heels. Here he makes sport for the devil himself, who leads the wild hunt across the desolate bogs and  over the rocky tors. On particularly stormy night you can hear his cries, as his Tregeagle howls are carried on the wind as it whips through the valleys.

On the banks of the Lynher river, near St Germans comes the old tale of Dando and his Dogs.  This pack of ghostly hounds, led by the spirit of local priest Dando who rides a magnificent horse, black as night, with eyes that gleam like the brightest stars.  (6)

Robert Hunt recorded the tale, and is reproduced below.

In the neighbourhood of the lovely village of St. Germans formerly lived a priest connected with the old priory church of this parish, whose life does not appear to have been quite consistent with his vows.

He lived the life of the traditional "jolly friar." He ate and drank of the best the land could give him, or money buy; and it is said that his indulgences extended far beyond the ordinary limits of good living. The priest Dando was, notwithstanding all his vices, a man liked by the people. He was good-natured, and therefore blind to many of their sins. Indeed, he threw a cloak over his own iniquities, which was inscribed "charity," and he freely forgave all those who came to his confessional.

As a man increases in years he becomes more deeply dyed with the polluted waters through which he may have waded. It rarely happens that an old sinner is ever a repentant one, until the decay of nature has reduced him to a state of second childhood. As long as health allows him to enjoy the sensualities of life, he continues to gratify his passions, regardless of the cost. He becomes more selfish, and his own gratification is the rule of his existence. So it has ever been, and so was it with Dando.

The sinful priest was a capital huntsman, and scoured the country far and near in pursuit of game, which was in those days abundant and varied over this well-wooded district. Dando, in the eagerness of the chase, paid no regard to any kind of property. Many a corn-field has been trampled down, and many a cottage garden destroyed by the horses and dogs which this impetuous hunter would lead unthinkingly over them. Curses deep, though not loud, would follow the old man, as even those who suffered by his excesses were still in fear of his priestly power.

Any man may sell his soul to the devil without going through the stereotyped process of signing a deed with his blood. Give up your soul to Satan's darling sins, and he will help you for a season, until he has his claims carefully wound around you, when the links are suddenly closed, and he seizes his victim, who has no power to resist.

Dando worshipped the sensual gods which he had created, and his external worship of the God of truth became every year more and more a hypocritical lie. The devil looked carefully after his prize. Of course to catch a dignitary of the church was a thing to cause rejoicings amongst the lost; and Dando was carefully lured to the undoing of his soul Health and wealth were secured to him, and by-and-by the measure of his sins was full, and he was left the victim to self-indulgences--a doomed man. With increasing years, and the immunities he enjoyed, Dando became more reckless. Wine and wassail, a board groaning with dishes which stimulated the sated appetite and the company of both sexes of dissolute habit exhausted his nights His days were devoted to the pursuits of the field, and to maintain the required excitement ardent drinks were supplied him by his wicked companions. It mattered not to Dando--provided the day was an auspicious one, if the scent would lie on the ground--even on the Sabbath, horses and hounds were ordered out, and the priest would be seen in full cry.One Sabbath morning Dando and his riotous rout were hunting over the Earth estate; game was plenty, and sport first-rate. Exhausted with a long and eager run, Dando called for drink. He had already exhausted the flasks of the attendant hunters.

"Whence can we get it?" asked one of the gang.

"Go to hell for it, if you can't get it on Earth," said the priest, with a bitter laugh at his own joke on the Earth estate.

At the moment, a dashing hunter, who had mingled with the throng unobserved, came forward, and presented a richly-mounted flask to Dando, saying:

"Here is some choice liquor distilled in the establishment you speak of. It will warm and revive you, I'll warrant. Drink deep; friend, drink."

Dando drank deep; the flask appeared to cling to his lips. The stranger hunter looked on with a rejoicing yet malignant expression;--a wicked smile playing over an otherwise tranquil face.

By-and-by Dando fetched a deep sigh, and removed the flask, exclaiming: "That was a drink indeed. Do the gods drink such nectar?"

"Devils do," said the hunter.

"An they do, I wish I were one," said Dando, who now rocked to and fro in a state of thorough intoxication, "methinks the drink is very like--" The impious expression died upon his lips.

Looking round with a half-idiotic stare, Dando saw that his new friend had appropriated several head of game. Notwithstanding his stupid intoxication, his selfishness asserted its power, and he seized the game, exclaiming, in a guttural, half-smothered voice: "None of these are thine."

"What I catch I keep," said the hunter.

"They're mine," stammered Dando.

Dando's wrath burst at once into a burning flame, uncontrolled by reason. He rolled himself off his horse, and rushed, staggering as he went, at the steed of his unknown friend, uttering most frightful oaths and curses. The strange hunter's horse was a splendid creature, black as night, and its eyes gleamed like the brightest stars, with unnatural lustre. The horse was turned adroitly aside, and Dando fell to the earth with much force. The fall appeared to add to his fury, and he roared with rage. Aided by his attendants, he was speedily on his legs, and again at the side of the hunter, who shook with laughter, shaking the game in derision, and quietly uttering: "They're mine."

"I'll go to hell after them, but I'll get them from thee," shouted Dando.

"So thou shalt," said the hunter; and seizing Dando by the collar, he lifted him from the ground, and placed him, as though he were a child, before him on the horse.
With a dash, the horse passed down the hill, its hoofs striking fire at every tread, and the dogs, barking furiously, followed impetuously. These strange riders reached the banks of the Lynher, and with a terrific leap, the horse and its riders, followed by the hounds, went out far in its waters, disappearing at length in a blaze of fire, which caused the stream to boil for a moment, and then the waters flowed on as tranquilly as ever over the doomed priest. All this happened in the sight of the assembled peasantry. Dando never more was seen, and his fearful death was received as a warning by many, who gave gifts to the church. One amongst them carved a chair for the bishop, and on it he represented Dando and his dogs, that the memory of his wickedness might be always renewed. There, in St. Germans' church, stands to this day the chair, and all who doubt the truth of this tradition may view the story carved in enduring oak.

The name Dando, seems to have mutated to Dondo within the Rame peninsula and along the south coast. Between Rame and the cliffs around Looe the wild hunt of The Dondo still haunt the lonely lanes, wild cliffs and dark woodlands.  Between Halloween and Candlemas, they can be witnessed on dark stormy nights,  and are traditionally seen as an eerie portent to a shipwreck. The Dondo also hunts the souls of the recently deceased and is sometimes seen disappearing into the cliffs between the Brawn and the Long Stone, to the east of Downderry. The Dondo’s ghostly wagon can also be heard rattling along the nearby lanes carrying the dead and collecting the odd lost traveller for good measure. (7) 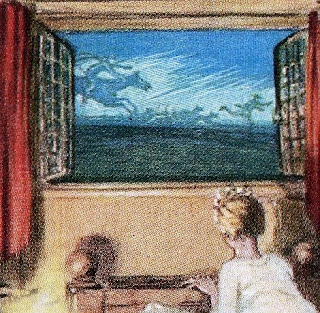 1. Popular Romances of the West of England by Robert Hunt

2. The Pencarrow Hunt by Merv Davey. Lien Gwerin No. 3

3. Mentioned in the introduction to Popular Romances of the West of England by Robert Hunt

5. Popular Romances of the West of England by Robert Hunt

6. A medieval misericord carving of Dando and his dogs can be viewed in St Germans church