The Solstice Goddess of Penzance

In this brand new article, esoteric explorer and psychogeographer Alex Langstone reflects upon the Bone-Horse-Goddess of Penzance and her links to the towns recently revived 'obby 'oss and solstice folk traditions. He explores some of the origins of the poetic myth and he experiences the dream-like qualities of Penglaz: the grizzly-headed-one!
The Solstice Goddess of Penzance
by Alex Langstone

The bone-horse Goddess of Penzance has a new guise, as She was reintroduced to the people of the West Cornwall town during 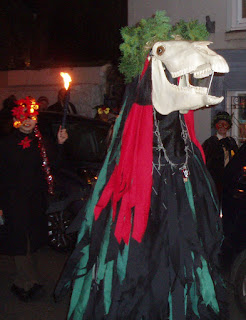 the 1992 revived Golowan festival. Golowan, the Feast of St. John, has, since its rebirth in 1991, become one of Britain's greatest annual folk festivals, a bubbling cauldron of traditions thrown together in glorious chaotic revelry! Pagan Celtic traditions dance along side traditional civic pomp. Christian worship blends with the colourful and iconic street parades of Mazey day, and Penglaz (the grizzly headed 'Obby 'Oss of Penzance) leads the midnight serpent dance in celebration of the newly elected Mock Mayor of the Quay.

The Cornish Fire Festival of Midsummer's Eve is generally acknowledged to stretch back to pre-Christian times. Originating as a festival of fertility and sun worship at the time of the summer solstice it owes its survival, in part to its Christian association with St John's Eve thus the name Golowan (Gol feast, (J)owan John). Its continuation as a living tradition into the 21st century is thanks in part, to the efforts of the Old Cornwall Societies who hold bonfire ceremonies on ancient hill tops the length and breadth of the Duchy on Midsummer's Eve, and also to the dedicated band of Penzance folk who tirelessly promote the festival of Golowan. References to the bonfires and Midsummer celebrations can be found in Bottrel's "Traditions and Hearth side stories of West Cornwall" (published 1870).

Cornwall is one of the few places in Britain where the ancient observances of the summer solstice are still honoured as mainstream. As the last glimmers of the setting sun light up the western ocean, shades of light flicker; sacred fire beacons blaze upon hilltops from Carn Brea in the west to Kit Hill on the Devon border. These bonfires are a celebration of the summer with the sun at its strongest. Believed to be Druidic in origin, the ceremony is spoke 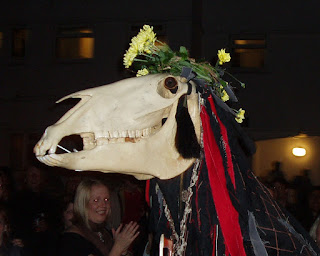 n in Cornish, and climaxes with the Lady of the Flowers casting into the now roaring flames a bunch of summer herbs. Festivals in Cornwall celebrated the Summer Solstice as the wedding of Heaven and Earth. Goddess manifests as Mother Earth and God as Sun King. Bonfires were lit to celebrate the Sun at its height of power and to ask the Sun not to withdraw into winter darkness. Midsummer Eve festivals in the countryside of Cornwall, would have firelight shining from every hill and peak. Dancers adorned in garlands and flowers jumped through the tall flames. This ancient Cornish Summer Bonfire tradition was revived during the 1920's and is still popular today. The spiral is a symbol associated with the Solstices and creation by the patterns of sacred geometry. Ancient dances follow the Sun's movement like a spiral. People joined hands weaving through the streets, winding into a decreasing spiral into the middle then unwinding back out again. The Sun moving from contraction at the centre of the spiral at winter solstice to expansion at Summer Solstice and back again. Midsummer is truly a celebration of the primal creative force of the universe.

In Penzance the week long celebrations of the Golowan festival culminate on Mazey Eve, where the town spills onto the streets in party mood. Fireworks are set off at the sea front, and as midnight approaches, crowds gather by the docks to help the Golowan band entice Penglaz, the grizzly headed 'obby 'oss from her stable with music and dancing! Penglaz then leads the mysterious serpent dance through the ancient streets around the docks. This chaotic Cornish dance runs well into the small hours and as previously stated it centres around the Obby Oss Penglaz, the white faced Mare Goddess of Penzance.

Penglaz is interesting. She shares similarities to other skeletal Obby Oss's called Y Fari Lwyd in Gwent and Mari Lwyd in Shropshire. She is the goddess Mari; the Fruitful One, and the grey mare goddess Rhiannon of Wales. She is many things to many people. To me Penglaz is a Night Mare, Epona of the Celts, Mari Lwyd of the Britons, the Bright Goddess of the Night and the White Goddess of Robert Graves poetic vision. She is also so much more, and the vision can change instantly!

She is both the dar

k muse and a beacon in the night. She is the White Horse Mother carved upon the hill of the dragon, a totem on the land and a vision from the breath of the serpent. Sacred guardian white horse of Britain, Mare Goddess of sovereignty.

So Penglaz is indeed the Solstice Goddess of Penzance, She who governs death and rebirth, transfiguration and renewal, light from the darkness and darkness from light. She is, by her nature, contradictory and confusing, anarchistic and frightening!

To return the balance of the solstices, the Cornish traditions and folklore of Christmas and midwinter have recently been reintroduced to the town. Penglaz forms a central role within this festival too and the Montol festival is now in its second year, and encourages guise dancing, mummers, traditional Cornish Carols and music. Amid the anarchistic celebrations Penglaz is there, dancing her mysterious and fatalistic spiral dance. Bucca, the strange enigmatic Cornish spirit of the sea and of fertility accompanies Penglaz, teasing and enticing the Grey Headed One to play out her secret and guarded mythology in the dark corners and long shadows of Penzance. At midwinter we have Bucca Dhu, the black spirit who plays with the Mare and midsummer sees Bucca Gwidden, the white spirit teasing our Solstice Goddess from her dark stable or nest, "lined with white horse-hair and the plumage of prophetic birds and littered with the jaw-bones and entrails of poets."

The White Goddess by Robert Graves
The Mabinogion
White Horse of Uffington by Paul Atlas-Saunders
Photographs by Alex Langstone (Summer Penglaz) and Sarah Jenner (Winter Penglaz) www.folkwales.org.uk/mari.html
Historic accounts of the obby oss in West Penwith
This article has also recently been published in the Brigantia 2009 issue of The Mirror of Isis. Click here to view.
2 comments: