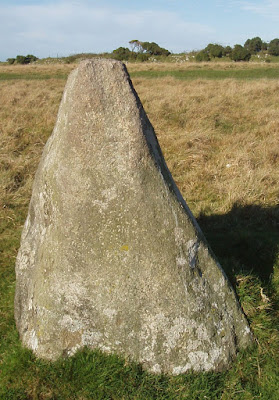 he 8th November 2009, Carole Young and I visited an unrecorded standing stone not far from Stannon stone circle at Harpurs Downs on Bodmin Moor. We had been alerted to this possible pre-historic stone by Cheryl Straffon, editor of Cornish earth mysteries magazine Meyn Mamvro and talented Cornish dowser Lana Jarvis. However we found much more than we expected and very soon we were asking ourselves if we had possibly discovered a hitherto unknown stone circle situated on a panoramic slope on the north-west edge of Bodmin Moor. 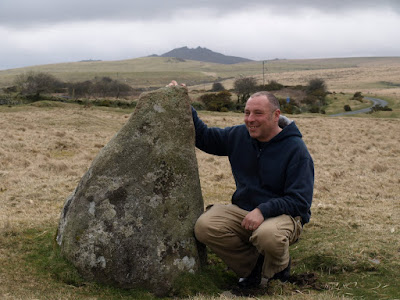 above: the only stone still standing, showing a possible
Summer Solstice aligment to Roughtor. Showery Tor can be glimpsed to the left.
The site lies on a small area of land between three minor roads which cross this area of moorland. The grid reference is SX1142 7984. As soon as we arrived at the spot, I could see that we were dealing with more than just a single standing stone. I immediately could see other fallen, half buried stones, which looked as though they made a circle. There are eight visible stones. One still standing, four clearly visible and three partially buried but obvious! They seem to form almost a perfect circle measuring approximately 22 metres west to east and 22 metres from north to south. The site appears to be aligned to the two nearby prominent peaks of Brown Willy (Bron Wennyly) and Roughtor. The large upright stone in the west aligns to the small flat stone in the east then onto Brown Willy. There is a largish recumbent stone in the north and a partially buried recumbent stone in the south. To the south east is Alex Tor. Roughtor is approximately east north east from the circles centre, which is where I made all the observations from. 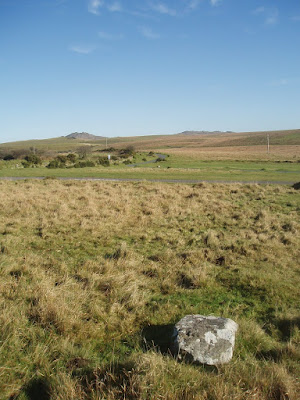 above: Roughtor and Brown Willy (Bron Wennyly) punctuate the horizon
Most of the remaining stones are between the standing one in the west, moving along towards the north and east. The southern side of the circle only has one obvious buried stone remaining. HES does record a couple of hut circles in the vicinity at SX 1139 7998 but this site does not look like any of the nearby hut circles on the slopes of Rough Tor, plus it is much bigger than any of the localised hut circles. 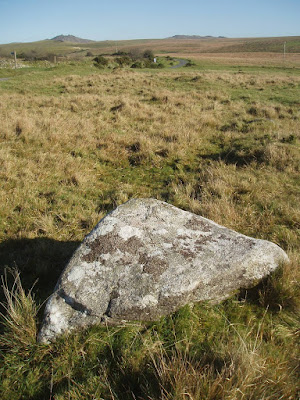 above: one of the larger visible fallen stones
These now lost hut circles were shown on the 1908 6-inch and 25-inch maps but could not be found on the ground in 1973 or 1984 by the OS and RCHM fieldworkers. The site is now under pasture. The destroyed hut circles are associated with a nearby pre-historic field system. On a later visit in 2010, accompanied by Paul Atlas-Saunders, Cheryl Straffon and Lana Jarvis, we took more measurements and attempted to locate the hut circles. Using GPS, we clearly found that the proposed stone circle was nearby to the lost hut circles but importantly was not one of the remaining hut circles. We rechecked the measurements and dowsing suggested that there were originally 18 stones. The 'circle' is admittedly small by Bodmin Moor standards, but not very different in size from King Arthur's Downs circles. There are good views to both Brown Willy (east - equinox sunrise?) and Rough Tor (NE - summer solstice sunrise?). It is definitely not part of the hut circle complex that is listed on the HER (number 1921) at SX1139 7995.

above: overwiew of the circle looking west
Peter Herring, Characterisation Inspector for English Heritage comments - "the largest stone is indeed on a low stony bank, probably part of a prehistoric field system. Agree with you that it is a very nice position with views to Roughtor, Brown Willy and indeed Showery Tor. The other stones might conceivably be part of something interesting, perhaps a stone circle, and the stony bank may be later and reusing the largest stone in its line."

In conclusion, this site needs to be verified, but my initial feelings are that it looks very interesting. I shall be conducting further experiments and observences from the site soon. I will report my findings both here and through HES and Meyn Mamvro.