Castlerigg, Castle How and Blencathra

A recent visit to the Cumbrian Lakes brought new insights into some well known, and some not-so-well-known ancient sites. A dawn vigil at Castlerigg stone circle at the Vernal Equinox proved interesting and initial exploration of newly visited Castle How hill fort upon the shores of the beautifully mystical Bassenthwaite Lake was inspiring. The ancient sacred peak of Blencathra seems to play a central role within the mythic landscape in this area.
Castlerigg, Castle How and Blencathra 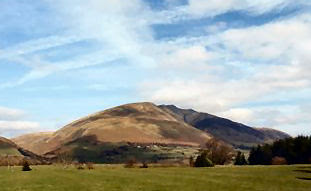 Blencathra - the ancient seat in the fells
Castlerigg stone circle is the most popular ancient monument in Cumbria, the circle is set within a circle of mountains, upon the summit of Chestnut Hill high above the Victorian lakeside town of Keswick. There are 38 stones in a circle approximately 30 metres in diameter. Unusually, within the ring is a rectangle of further standing stones about which very little is known. The tallest stone is 2.3 metres high. It was built around 3000 BC - the beginning of the later Neolithic Period - and is one of the earliest stone circles in Britain. Several of the surrounding peaks seem to play an important factor in the geometry of the site, and recent research has shown that Blencathra (2,848 ft) can be placed in a central role in the sites alignments.

The circles northern entrance aligns precisely towards the divide between the summits of Skiddaw and Blencathra, with the Summer Solstice sun arising over Blencathra and setting over Skiddaw. The stone circle is also an observation site for the Major Lunar Standstill. We visited this site at the Vernal Equinox for the first time this year, and we witnessed the sun's rays moving slowly up the side of Threlkeld Knots, eventually rising precisely in a notch just below the summit of Clough Head Fell. The rectangle of stones as mentioned above seems to point towards the Vernal Equinox sunrise, and this alignment continues for another 6 miles to the east, towards Great Mell Fell, with it's mountain-top tumulus. This alignment is said to mark the rising of the constellation of the Plaiedes, heralding the approach of Beltane, and of the summer! Despite the amazing sunrise 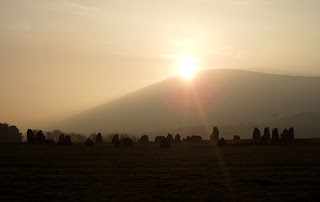 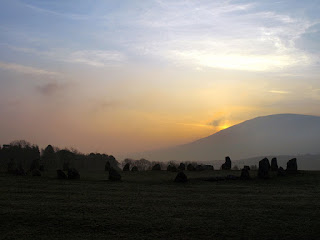 The Equinox sun moves along the edge of Clough Head, and rises in a prominent notch just below the summit.
we witnessed, it was sad to see (but obviously totally necessary) that the National Trust have had to rope off part of the circle, to allow the grass to grow back - another sign that this is the most visited pre-historic tourist attraction in the region. We also noted two bare patches within the circle

, one due to bonfires being lit at the centre and the other, again due to erosion by tourists, walkers and livestock.

Another nearby ancient site seems to have an important alignment to Blencathra. Mayburgh Henge, near Penrith (pictured right) is one of three henge monuments situated closely together of which two now only survive. In the centre of Mayburgh henge is a solitary 9 foot standing stone, originally one of four. The main axis of the site is east-west, and the equinox sun rises in the entrance to the east and sets on the saddle notch of the very prominent but distant Blencathra. Several other ancient sites seem to focus on Blencathra; the Tumulus and stone circle on Knipescar Common, Swarth Fell stone circle, Castlerigg (as previously mentioned), Moor Divock Stone Circles and the Cockpit stone Circle. All-in-all a very special mountain! Its Cumbric name may give us clues to what it may symbolise? It is likely that the name Blencathra is derived from the ancient Cumbric language blaen (a bare hill top) and cathrach (a chair). This would give a meaning of "the bare hill top shaped like a chair", which perfectly describes the topography of the hill. So Blencathra becomes the ancient seat or throne of the land!

Castle How, Faerie Gateway of Bassenthwaite? 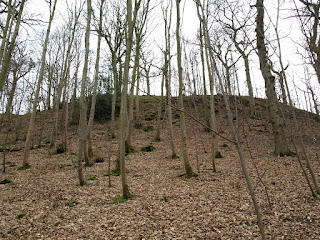 Castle How Hill Fort, Bassenthwaite
Castle How (sometimes spelt Howe) is a small Iron Age hill fort which rises steeply near the northern tip of Bassenthwaite Lake. Marked on OS Maps (NY202 308) and known locally as the fairy mound, there are stories of people disappearing into thin air whilst walking near the site, and other stories of things appearing and then disappearing again.

The hill fort is now thickly wooded with birch and beech and is very atmospheric, with superb views across the lake. Ramparts can clearly be seen at the periphery and the hill top is completely flat. A beautiful and little known ancient site, though a well worn pathway to the summit shows that local folk like to visit, and it is a shame that a recent fire has been lit on the summit of this archaeologically sensitive site. 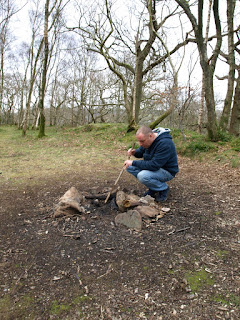 Inspecting fire damage on the summit of Castle How
References.
A Guide to the Stone Circles of Cumbria by Robert W.E. Farrah
www.visitcumbria.com/stonecir.htm
Guidelines for visiting ancient sites click here
Photography by Paul Atlas-Saunders