Folklore of the Roseland Peninsula

The Roseland peninsula is situated roughly midway along the southern Cornish shore and lies between the Carrick Roads to the west and Mevagissey Bay in the east. The district boasts pretty villages, sandy beaches and the small town of St Mawes, which lies at mouth of the Percuil River. The small port is named after St Maudez, a 6th Century monk, who was popular in Brittany. [i] He may have been Welsh or Irish and had one of his first settlements on the south coast of Cornwall.  The towns holy well is named after the saint, and may have formed part of his hermitage, as local lore claims that Maudez created a chair in the rock above the well. [ii] The old well later became a wishing well, where pins were dropped into it to gain favours. [iii] 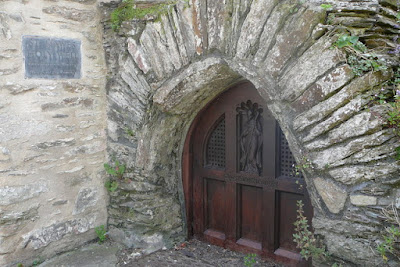 At the other end of the peninsula lies the village of Veryan, where in the 19th century, vicar and local land owner Jeremiah Trist built the famous round house sentinels that guard the main road in and out of the village. They were built between 1815 and 1818 and each have a thatched roof crowned by a cross. The round nature of each building was described as ‘preventing the devil from entering the village, as there are no corners to hide in’. 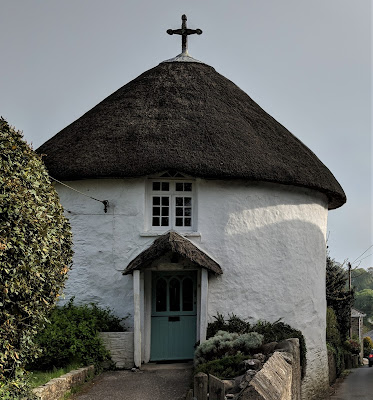 There is a curious tradition connected to Veryan parish church. It states that should the church clock strike on the Sunday morning during the singing of the hymn before the sermon, or before the ‘collect against perils’ at Evening Prayer, there will be a death in the parish before the following Sunday. [iv]

Just outside the village, around a mile or so lies Carne Beacon, a large Bronze Age barrow whose folkloric story lays claim to be the last resting place of King Gerennius. His body was brought across Gerrans Bay, from his castle at Dingerein, on a golden boat with silver oars, and both the boat, the oars and the king still wearing his crown were buried in the barrow.[v] Sadly, when Carne Beacon was excavated, only a cist with some cremated remains were discovered. Maybe they needed to dig deeper? 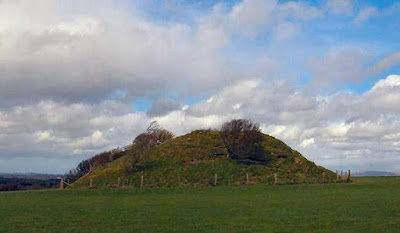 Nearby at Dingerein Castle hill fort lies the Mermaid’s Hole, a subterranean passage, which was said to link the castle to the sea.[vi] Possibly alluding to a lost tale or tradition. Folklorist Margaret Courtney had this to say about the legend of Dingerein and the Mermaid’s Hole:

His palace of Dingerein was in the neighbouring village of Gerrans. A subterranean passage, now known as Mermaid's Hole, one day discovered when ploughing a field, was supposed to have led from it to the sea.

There is a cave below Penarrin Point [vii] which is named after one of the most famous sons of Cornish folklore, Jan Tregeagle, and when storms rage across this part of the Roseland coast, it is blamed on Tregeagle’s spirit, which haunts the cave and conjures storms in league with the devil himself.

Just to the north of Veryan, lies the hamlet of Bessy Beneath, where oral tradition concludes that either a witch or highwaywoman was hanged and buried at the crossroads. However, the name may possibly be an English corruption of the Cornish bosveneth meaning a hillside dwelling [viii]

The ancient crossing at King Harry Ferry has an interesting tale associated with its founding. It was often repeated in days gone by that King Hal crossed the river at this spot with his queen on his back. The river here is several fathoms deep, so King Hal must have been a giant to be able to afford this great feat. Those that cross here today, will recall that just upstream of the ferry, mighty ocean-going ships are often laid up for repair, confirming how deep the river is at this particular crossing.

The old church at St Anthony, not far from the lighthouse, at the sea ward end of the peninsula, lies close to where the former priory of St Mary de Vale once stood. The site of the Priory is cursed. It was the last prior who laid the curse upon the site, after Henry VIII visited and told him that the priory and its surrounding lands days were numbered. The curse stated that the new owner and his family would all die prematurely. The new holder of the lands died soon after he took over, and so did all his family.[ix]

[i] The Saints of Cornwall by Catherine Rachel John, p 54

[iv] Cornish Feasts and Folklore by M A Courtney, p 102

[v] Popular Romances of the West of England by Robert Hunt, p 459

[vi] Cornish Feasts and Folklore by M A Courtney, p 103

[vii] The Folklore of Cornwall by Deane and Shaw p 84

[viii] A Concise Dictionary of Cornish Place-Names by Craig Weatherhill

[ix] Cornish Feasts and Folklore by M A Courtney, p 102 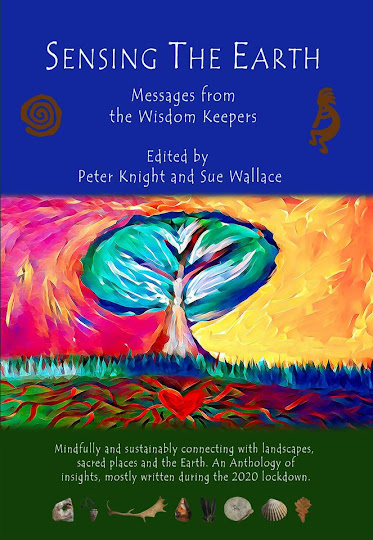 A few months ago, during the first lock-down, (March - June 2020) I was delighted to be invited to contribute to a new book entitled 'Sensing the Earth - Messages from the Wisdom Keepers'. The book is now available and is edited by Peter Knight and Sue Wallace. Inside you will find over 250 pages of diverse and interesting content, each written by one of 53 different contributors. Alongside myself, there are chapters from George Monbiot, Philip Carr-Gomm, Paul Devereux, Hugh Newman, Caitlin Matthews, Greta Thunberg and many many others (including friends, Yuri Leitch, Cheryl Straffon and Gary Biltcliffe). This is a truly eclectic and inspiring collaboration, subject matter includes environmentalism, earth mysteries, shamanism, nature, sacred sites, the re-enchantment of the land and ancient traditions. Fully illustrated with loads of colour photos and inspiring art. Please click book cover for purchasing details.
No comments: 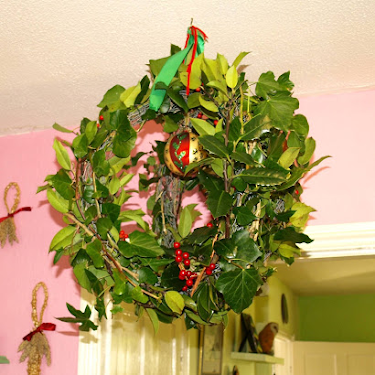 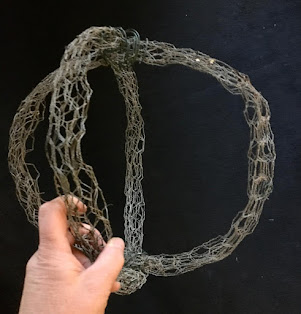 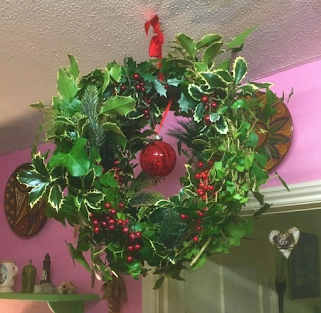 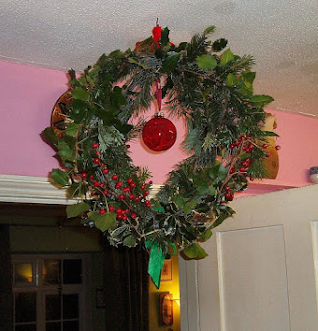 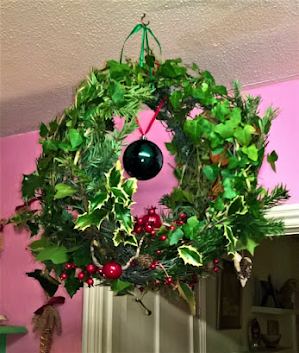 A Delve into Essex Folk-Magic in Easthorpe 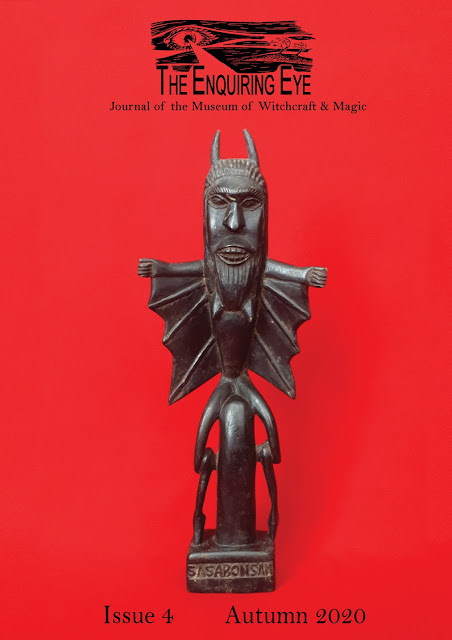 You can read all about my investigation into the witchcraft, cunning-folk, and the mysterious and enigmatic Sheela-na-Gig in the north-east Essex village of Easthorpe in my article  -

The Easthorpe Witches, Essex Folk-Magic and the Sheela-na-gig.

Now published in the brand new edition of The Enquiring Eye: Journal of the Museum of Witchcraft & Magic

Homage to the Uffington White Horse 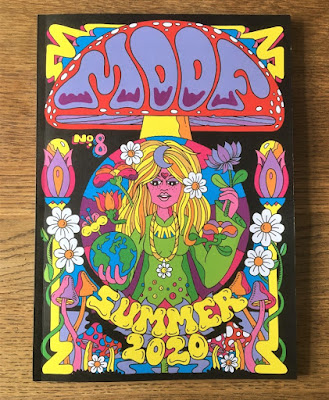 The fabulous MOOF magazine issue 8, Summer 2020 arrived over the weekend. The magazine is packed with psychedelia and strangeness. Contents include interviews with Maxine Sanders, Zandra Rhodes and the latest incarnation of Gong, plus fab articles on John Michell and the Earth Mysteries movement, new music reviews and a recommended list of British counterculture literature. Also included is my own homage to the folklore and psychogeography of the Uffington white horse and the surrounding vale, with a wonderful accompanying illustration of the White Horse by Paul Atlas-Saunders.

You can order MOOF here
Paul can be contacted here 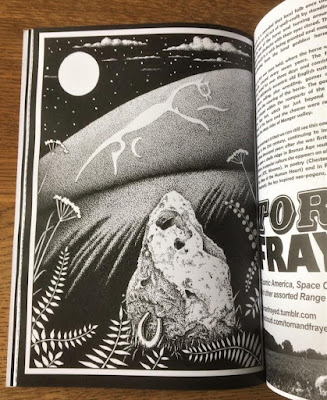 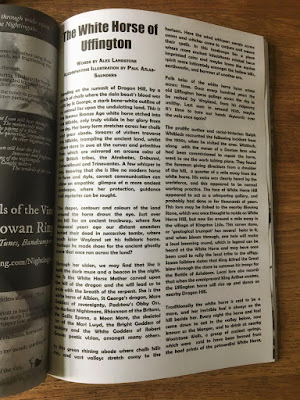 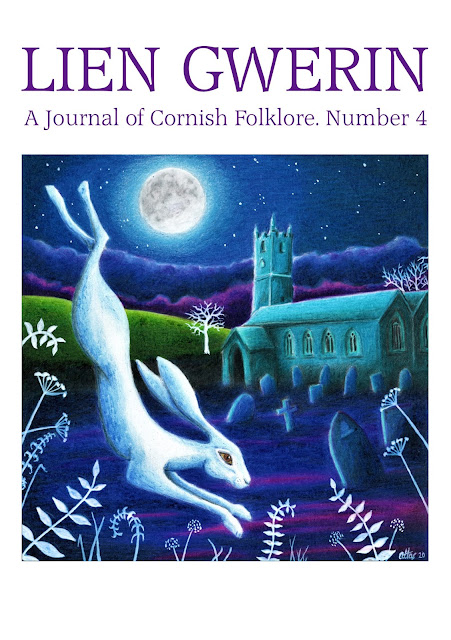 The journal is now available to purchase here:

The Egloshayle Ringers by Salt and Sky. saltandskymusic.com

Do you know where Cornwall's only triple hare carving can be viewed? Find out in Lien Gwerin 4 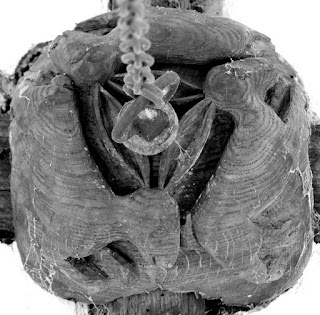 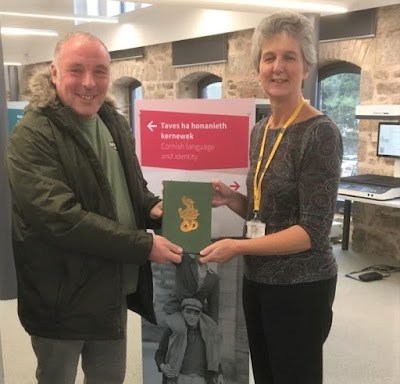 I recently had the pleasure of  visiting Kresen Kernow, the brand new Cornish archive centre in Redruth, where I donated a copy of my Cornish folklore title, From Granite to Sea, which explores the folklore and traditions of Bodmin Moor and East Cornwall. It will now proudly sit amongst their other Cornish folklore titles which came before to inspire me.
No comments: