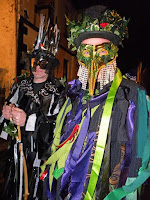 At the Winter Solstice 2007, a Penzance folk festival, missing from the Cornish calendar for over one hundred years, was re-born. The modern festival is called Montol and seeks to revive some of the ancient mid-winter and Victorian Christmas customs of Cornish culture. The name "Montol" or “An Vontol” means Winter Solstice according to the Cornish language site Teer Ha Tavaz, and is taken from Edward Lhuyd’s MSS Vocabulary from 1700. The festival has undergone many transformations since it began eight years ago. In the beginning was a festival full of Cornish culture, reviving the Victorian Christmas traditions of Guising, and blending it with older pagan traditions of the Winter Solstice. Over the years, different formats and ideas have been tried to greater and sometimes lesser effect. However Montol 2014 saw a welcome return to the festivals origins.

In the early 1800s, Penzance could boast a Christmas tradition like no other. Guise Bands would cause misrule around the town, and the most well-known of these were the Corn-Market Revellers and Tinkerlers Shop and in the 1830's the Corn-Market Revellers became the most notorious guise band in the whole of Cornwall. The President of the Royal Society wrote about them, the great Christmas books of the era spoke of them highly and they were even mentioned in the Times. William Sandys wrote about the Corn Market Revellers, and much of what we see today is based on his observations. 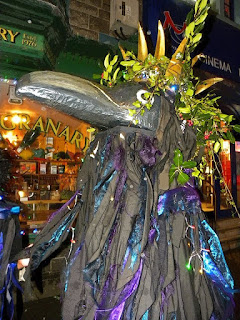 The modern guise bands, now fully revived and renamed as guise guilds, are flourishing. ‘The Glorious Company of the Egyptian House’, ‘The Corn Market Revellers’ and ‘The Noble Company of the Turks Head’ are the official Montol guilds and they seek to continue the Cornish guising traditions so beloved of Victorian Penzance. Colourful and unusual guise costumes are worn, giving a feel of mystery, unease and misrule. Alongside the costumes of the guilds are the guise beasts. Again William Sandys observed ‘Old Penglaze then comes in on his horse which winces and capers about grotesquely’. In 2014 these beasts have mutated into an interesting and highly mysterious cast. ‘Old Ned’ the crow appears throughout the evening dancing covertly with his teaser to the jingle-jangle of many bells. ‘Ramesses’ the ram-skulled beast of the Glorious Company of the Egyptian House moves between guisers adorned in Egyptian masks and headgear to the haunting sound of a hurdy-gurdy. ‘Kasek-Nos’, the nightmare ‘Oss is teased and conjured from the Admiral Benbow pub, to lead the 10pm procession, which winds its way down to the docks, where a fire is lit and the mock is chalked, before being ceremoniously burned on the Montol fire, symbolising the end of the old and the beginning of the new. 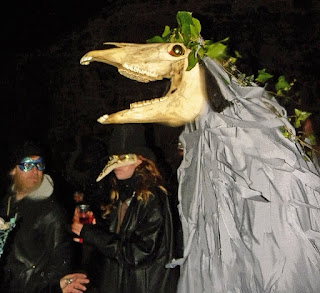 Montol 2014 was a spectacular event, full of colour, music, misrule and mystery. The great thing about this festival is the community focus on participation. Alongside the Guise Guilds are many other guisers, who made the night a cornucopia of bizarre artistry, all upon the same collective Montol theme of guise and misrule. Most importantly this community festival brought many folk together from across Cornwall. Penzance truly came alive on the winter solstice of 2014, helping to bring light from dark and colour, music and dance from the deepest recesses of winter, as is the custom at this time of year.
Montol is organised by the Cornish Culture Association. www.cornishculture.co.uk.