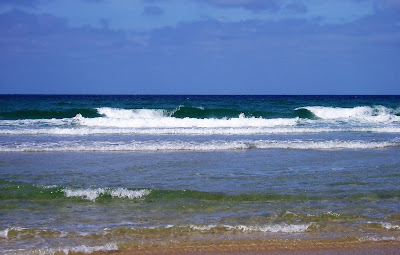 The Dark Mysteries and Folklore of Porthtowan
Alex Langstone

Lying on the dramatic north coast, midway between St Ives and Newquay, the coastal village of Porthtowan nestles amongst one of Cornwall’s most iconic and historic mining landscapes, now part of the UNESCO world heritage site. Perhaps less well known is the hidden history and folklore of the area, where ghosts, legends and dark mysteries abound. Robert Hunt, the eminent collector of Cornish folktales and narrative had this to say about Porthtowan Beach:

The Voice from the Sea

A fisherman or a pilot was walking one night on the sands at Porth-Towan, when all was still save the monotonous fall of the light waves upon the sand. He distinctly heard a voice from the sea exclaiming,— “The hour is come, but not the man.” This was repeated three times when a black figure, like that of a man, appeared on the top of the hill. It paused for a moment, then rushed impetuously down the steep incline, over the sands, and was lost in the sea. (1)

This paragraph is fascinating, and from the description it is easy to stand on the beach today and visualise the order of ghostly events. Having lived in Porthtowan and stood by the tide line after dark many times, it is clear that the fisherman or pilot was walking along the beach heading towards the east cliff. For this dramatic cliff rises steeply from the cove and has a distinct and steep pathway which adjoins the sand at its base. It is amazingly easy to imagine this dark figure standing on the clifftop, briefly silhouetted against the night sky, then heading down the precarious path and onto the sandy beach, before running into the pounding waves.

At some point in time, an extra piece of the tale has been added, possibly through a village droll teller, where the dark figure heads into the waves towards a ghost-ship, which mysteriously appears from a sea-mist on the ocean’s horizon. Many ships have been wrecked nearby and again, Robert Hunt recorded that where a ship was wrecked the souls of the drowned sailors will haunt the shore and call out to the dead. (2) 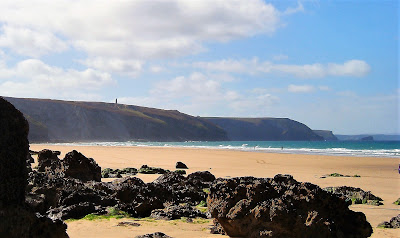 As the tide recedes, other adjacent coves become accessible, and Lushington is a rocky cove immediately to the west of the main beach, guarded by the famous Tobban Horse rock. This beach always seems to have a cold feel about it, even on warm sunny days, and many folk wont hang around here for too long.

It was on the clifftop above, at RAF Portreath where some of the deadliest chemical weaponry was developed during the 1950s in a secret government installation known as Nancekuke Base. The facility closed in 1980, and many of the buildings and some equipment were buried on the site.(3)  However, rumours quickly spread that the remaining chemicals were disposed of by pumping them into the sea through the vast network of old mine shafts on Nancekuke common. Today it is a military radar station, and during the mid-1980s many of the radar technicians witnessed a man dressed in a pilot’s uniform walk through a closed hangar door. It is believed that he is the restless spirit of a 2nd world war pilot who crashed nearby. (4)

Strange eerie balls of light can sometimes be seen on the clifftops amongst the ruins of the mines. Mainly seeming to manifest during the Autumn, these ghost-lights have been described as materialising around a metre from the ground,  and issue a strange ethereal glow, which lights up the clifftop for a few seconds, before suddenly vanishing. (5)
Another piece of folklore can be found at the other side of the village at Mile Hill. This tale concerns a fearsome fire-breathing dragon, who once made its lair up on the hilltop, between Chapel Hill and Nancekuke Common. The dragon regularly stalked the area seeking food of sheep and cattle, terrifying the community, and fiercely marking its territory. However, on one particular night on the eve of May and close to midnight, a ghostly black and white spotted dog who haunted the nearby lanes and coombes appeared. He was on the hunt for the dragon and soon found it eating one of the local farmer’s sheep. He squared up to the dragon and let out a long low growl. The dragon started to move in readiness to strike the dog, but the ghost dog sank its teeth into the dragons tail, ripping the tip clean off. The monster let out a fiery roar and the dog chased it towards the cliffs and the dragon was never seen again. The black and white ghost dog is still sometimes seen in the area. Appearing after dark, he stalks the narrow lanes around Porthtowan, and in particular on the old liminal festive nights of Halloween, Candlemas, May Eve, Midsummer, Midwinter and Lammas. (6)
Notes
[1] Popular Romances of the West of England by Robert Hunt

[5] Myths and Legends of Cornwall by Craig Weatherhill and Paul Devereux, p 61

[6] Ghosts of Cornwall by Peter Underwood, pp 68, 69
This piece was first published as part of my regular Cornish Folklore column in Meyn Mamvro, Vol 2 No. 3
© Alex Langstone
No comments:

The old Cornish harvest festival of Guldize was, and still is celebrated across Cornwall with “Crying the Neck” ceremonies and communal feasts, music and dance. Most are held by the many local branches of the Federation of Old Cornwall Societies, and were revived in 1928, though evidence shows that this tradition is far older, dating back to the eighteenth century and maybe to the distant past. Each year a different farm would be chosen and after the grain harvest was complete, the ceremony would be held in the last field that was harvested, where a small amount of corn would be left standing, as it was believed that the spirit of the crop would reside in these last stalks.  The last standing grain would then be cut with a scythe, tied together and was held aloft to the east, south and west with the cry “I have’n! I have’n! I have’n!”, to which the assembly responds “What ‘ave ee? What ‘ave ee? What ‘ave ee?” and the cutter replies “A Neck! A Neck! A Neck!” and then everybody shouts “Hurrah! Hurrah! Hurrah!”

The ceremony is concluded by prayers from the local clergy.  The neck was then paraded to the local church or chapel, often accompanied by the local silver band, where a harvest service was taken. Then all would attend a harvest supper, where food was shared and stories told, harvest songs were sung and much dancing took place.

Around the edge of Bodmin Moor, this tradition appears to have a much older pedigree. On the ceiling of an old 16th century cottage at Rillaton is a plaster roundel depicting a sheaf of wheat all garlanded ready for the ceremony, along with farm tools and surrounded by a circle made from wheat ears. The motif was carved in situ in 1599, when the house was built and the building was originally the Dower House for the Manor of Rillaton, which was one of the original seventeen manors belonging to the Earldom of Cornwall. This unique piece of craftsmanship has been authenticated by English Heritage and is a real testament to the history and folklore of Crying the Neck in this area of Cornwall.   The annual Rillaton ‘Cry’ is still held each year in the traditional manner, pretty much unchanged for centuries, as the old plaster roundel will attest.

The ‘Neck’ ceremony at nearby St Cleer once included placing a witch’s hat and broom on the fire as a charm to keep evil at bay.  The Neck was often called The Craw or The Crow in some parts of mid and east Cornwall and the following ‘Craw sheaf ceremony’ was recorded at St Wenn in the 1930s by Stanley Opie –

The following ceremony is remembered at the putting in of the craw or crow sheaf, in the building of the rick. This would be well raised on poles (6 or 7 lengthways with cross poles) laid across the tops of the stone ‘keps and posses’ (caps and posts). The ‘Mow stead’, or rick, was built up sheaf by sheaf and when it came to the putting in of the top corner sheaf, the following verse would be proclaimed so that it could be heard almost all over the parish ‘The Crow sheaf is in, ‘tis time to begin, to drink strong beer, and we’ve got it ‘ere.’ while one of them would lift the beer jar.

On the eastern side of Bodmin Moor at North Hill during the 1930s, Goldhys was celebrated with a broom dance to the tune of ‘So Early in the Morning’. This was recorded in Old Cornwall magazine in 1931, where the writer, E. Thompson says:

“…I must not forget to mention the dance over the Broomstick. This is most interesting especially if someone is present with a concertina. The Dance, I think it is to the tune of So Early in The Morning. It’s fine when you hear the heavy boots beating a tattoo on the stone floors, as the dancers first lift one leg then the other, to pass the broomstick from hand to hand, as if they were weaving. What a wonderful time too. As the dance proceeds, the musician plays faster and faster and the dancers have to dance faster. It is a marvel how these men, some big and well built, can jump so nimbly as they do in this dance.”