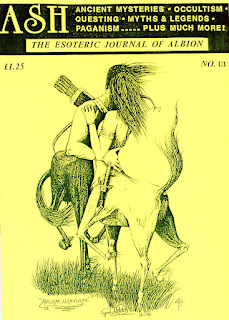 It is with great pleasure that I can now re-publish an interview that ASH Magazine co-editor Dave Hunt produced for the Summer 1992 edition of the magazine. The interview is now over 30 years old, so please bear this in mind when reading it! Chesca's Greenwood Tarot is now unfortunately out of print but some online information is available here: Green Wood tarot

This, the second in our occasional series of interviews with personalities within the esoteric scene takes us to meet one of the countries foremost "Magical Artists". Dave Hunt is the man with the questions.

Dave: When and how did you become involved in the esoteric?

Chesca: I was always mystically minded, but a deeper interest started about 10 years ago. Three specific occasions come to mind.

1. When I moved to Kings Cross and started having visions of a huge green and gold Goddess called Elen, standing over St Pancras old church. I spent years trying to understand what or who I had seen, whilst researching the lost mythology of London, some of which is written up in the book I edited "Legendary London" and in my booklet "Mysterious Kings Cross".

2. Whilst I was still living in Lancaster, I took a book out of the Library called "The Silbury Treasure" by Michael Dames. I can honestly say that book changed my life, not only did I rush down to Avebury and Silbury but it changed my way of looking at nature. I seemed to be able to tap into a sort of memory at some ancient places and interact with them, now in the present. Sometimes I see places with a sort of x-ray history, seeing who or what had been "worshipped" there in prehistoric times and how succeeding cultures changes and adapted their "worship" depending on their cultural belief system.

3. The third early influence for me was hearing about the Green Stone saga from Andrew Collins. I learned a lot from him, about the interaction between the physical world and the psychic.

Dave: What are your personal beliefs? 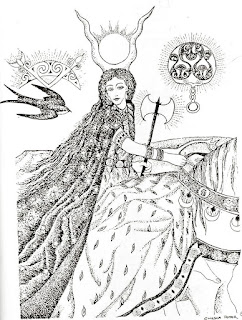 Chesca: I don't really know how to answer this. I am not a fundamentalist, meaning I don't have a rigid belief system. Having explored many aspects of the mysteries, I believe part of my purpose is to rediscover and make public the very ancient "green" mythologies, updating their relevance, so new people can meditate and contact ancient spirits of the land in order to empower woodland and nature.

Dave: From where do you derive inspiration for your art?

Chesca: The inspiration for my artwork comes from sacred places and my psychic or imaginative contact with the spirits of the land.

Dave: Did you have any formal training?

Chesca: I trained at Edinburgh in art history and print making.

Dave: Who are your favourite artists? 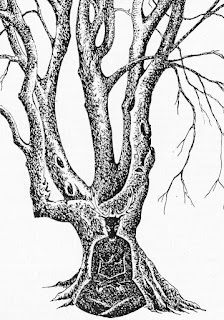 Dave: What are your artistic aspirations?

Chesca: I can only think of a couple of years at a time. At the moment I am working on the Green Wood Tarot with Mark Ryan. Redesigning and restructuring the tarot system to be based on the wheel of the year. My dream is to be a "site guardian" of a small woodland and spring, and to be caretaker on all levels, of the natural history and ecology, and to make sure the spirits of the place are strong and happy.

Dave: What are your views on the future of the British Pagan movement?

Chesca: I really don't know where the British pagan movement will go in the future. I would like to see less emphasis placed on individual experience, personal development and satisfaction. The land is in crisis and I feel that Pagans should take far more magical responsibility for the effects of their rites on the land. I think that some pagans are destroying ancient sites because they presume that any pagan rituals are good for them., but actually if the beings they call on do not belong to the place, or know the place, it can unbalance the energies. I think people are draining sacred places of their power by not feeding that power back to them!

Artwork by Chesca Potter, as submitted for the original interview. Questions by Dave Hunt.
No comments: