To celebrate this year's Solstice, here is a poem reproduced from Lucifer Bridge, which is available to by now from www.spiritofalbionbooks.co.uk. May the sun shine and the energy pulse. 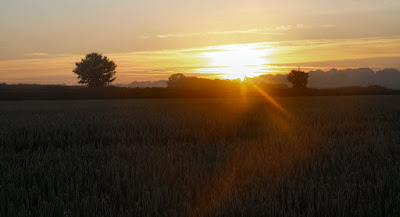 Rearing monsters from a slumbering sleep
Rise up and shine from the darkening deep
Solstice sun through the dappled leaves
Serpent pulses, glistens then takes his leave.

Dragons fused in the summer sky
Above the ancient oak, we hear their ancient cry
Mid-summer passions waft and wend
Through the rippling shade to the shining end!

Secretive journeys through the slumbering hills
Entwining colliding taking their fill
Summer energy pulses, pulses round
To where it is needed and there can be found.

See here for more on the Summer Solstice in Kernow.
No comments: 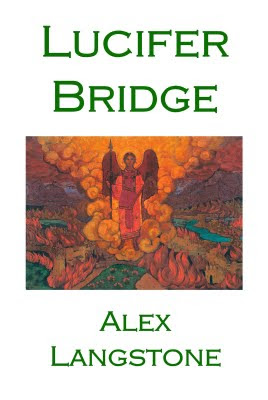 A few weeks ago my poetry anthology Lucifer Bridge was reviewed on the website of artist, writer and musician Jim Kirkwood. I have reproduced it below for those who may not have seen it. Thanks to Jim for a great review.

Nicholas Roerich caught my attention a few years ago when I stumbled across a painting called “Mother of the World”. Anyone who can paint something so simple in execution and yet so profound, that crosses the false religious boundaries humanity is so fond of, has my immediate respect. His work is both mystical and influential. He designed the costumes for Stravinsky’s “Rites of Spring”, played a large part in the building of Russia’s first Buddhist temple, and translated Helena Blavatsky’s “Secret Doctrine” into Russian. Perhaps influential is an understatement. Yet his name remains a mystery to most. I like a mystery! And yes, I like the cover! “The Last Angel” by Nicholas Roerich is Alex’s choice of artwork for the cover and is typical of Alex’s attention to detail and fondness for exploring hidden depths of meaning. Then there is the poetry and a feast for the mind and soul it is. What we have are thirty poems that take you on a journey into the natural beauty and hidden world of Nature, and then some! It is a journey which begins quite gently with “Lor hag Mor”. It is immediately unusual though. I mean, how many people stand on the beach at night. It is a different experience. The tides have washed away the activities of the day and we are presented from the first with observations of


“........mackerel skies
Scudding clouds
Billowing, scurrying, hurrying
Across the round white disc of the moon”

The unusual context of this opening poem is an invitation. Never stood on a beach at night? Try it. An everyday place becomes something else. A Druid is revealed on the strand between the sea and the sea shore, a bard whispers to the soul, listen if you will to the tidal rhythm of words. This poem is a preparation of sorts for the Otherworldlyness to come, where we are plunged into living folklore of the sea itself. “Sea Girl”.

Dark, yes, but as anyone who knows anything of the sea, it both gives and takes life. In days of yore, fishermen knew all too well how precarious was their day to day existence upon a sea “which never sleeps”. I love this stuff. It reminds me of the haunting poems and prose of Fiona Macloed, a Celtic visionary of the 19th century, who was, like Alex, no stranger to Celtic Myth and Druidism. On we go, meeting as we do, Black Tiamat, the ‘Obby Oss’ of Penglaz, and the rising grey rock of “Carrack Looz en Cooz”

These are not simply observations, they are deep and profound experiences and the following poems provide us with a glimpse into the poets soul and the powerful forces at work there. “Men an Tol”, “An Undefinable Thought”, “White Water Dash” “The Aira Force Faeries” are a souls vision of what is happening around him. It demands something. “Further up and further in” as Lewis would say. A Pilgrimage that leads to a personal revelation, “Nature is my Religion”. The poet has nailed his colours to the mast! The Goddess is revealed. Dionysus is revealed. And we come to two of my personal favourites. “Oh Sacred Heart” and “Helena”. Oh Sacred Heart is one simple verse, one simple prayer.

“Oh Sacred Heart
Thy luminous hill of vision
Lead us forth
Along the shimmering
Secret byways
Of England’s green Avalon”.

But how much does it say! And Helena, a longer and more complex piece continues in the same mood. It is a descriptive poem of an experience which leads naturally into prayer. I should say that for me, if any of these poems reveal the true mind of this poet, then Helena is a window into an exploring soul.

And the poet stands in that space enraptured,

“At the edge of the wild gorse-entangled upland
Of the arcane sea-clad Celtic fringe.”

And where else would a Celtic bard and druid be, but in the sacred spaces of the world. Alex walks his talk, and of course we have the title poem of this collection.

“Lush green trees
Swoop like the curve
Of angels wings
Down to the water’s surface
Sometimes breaking the stillness
Of the moment.”

Beautiful! And what angel is this we wonder?

“We wait twilight upon Lucifer Bridge.
At the chosen moment they come
From their grazing pastures
The Nephilim!”

Rather more than a tongue in cheek reference to a certain Goth band, I think. Love it.