Mapping the Sun at the Hurlers


Above: Rainbow over the stones. (Pic. credit Alex Langstone)

Mapping the Sun, one of the Cornish archaeological events of the year ran from 16th – 24th September 2013. The event was an attempt to further understand our Bronze Age past from the perspective of the Hurlers stone circles and surrounding ceremonial landscape. Central to the event was the archaeological excavation of the ‘crystal pavement’, originally discovered in 1938 by the Ministry of Works during their excavation and scheduling of the Hurlers. I attended the first day, and went to a fascinating talk by Brian Sheen from Cornwall’s Roseland Observatory, on the astronomy of the area. Brian spoke about the Hurlers being an astronomical calendar, aligning to celestial events throughout the year, but particularly the winter solstice, where he believes that the three stone circles align to Orion’s belt, which rises due south of the Hurlers stone circles at the Winter Solstice. The Hurlers landscape calendar aligns to significant sites on the horizon. Due North is Stowes Hill, in the East, Kit Hill. Minions Mound aligns due south and in the West a series of Cairns. 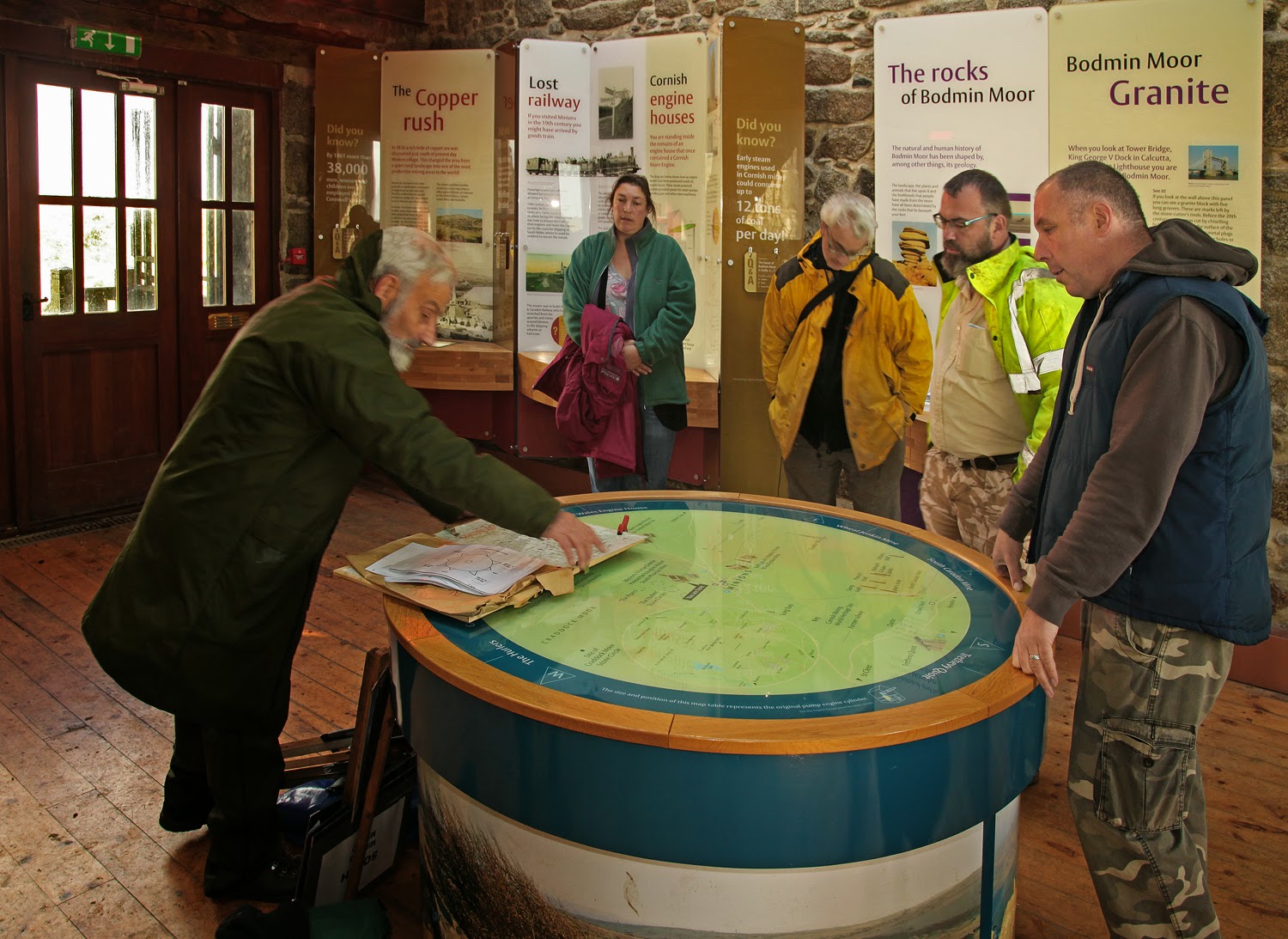 Above: Brian Sheen's talk on the astronomy of the Hurlers (Pic. credit Anthony Piper)

The dig of the ‘crystal pavement’ was delayed by a couple of days due to the torrential rain, but eventually got underway, with the help of many volunteers. As usual, the dig has given us many more questions than answers at this early stage, including the obvious one; is this really a pavement at all, and as it appears to be made from rough local granite, where did the 1938 excavation get the idea of a ‘crystal pavement’? Some crystalline rock deposits were found in what appears to be a ditch each side of the ‘pavement’ so maybe this partially answers our question. Interestingly there is a small standing stone in the ‘pavement’, poking up at around the halfway point, and archaeologist Jacky Nowakowski has speculated that it may be a fixed point in the landscape to map specific stars in the sky, and astronomer Brian Sheen seems to agree stating that the monument is a giant landscape calendar used to predict the changing seasons and the movement of stars. 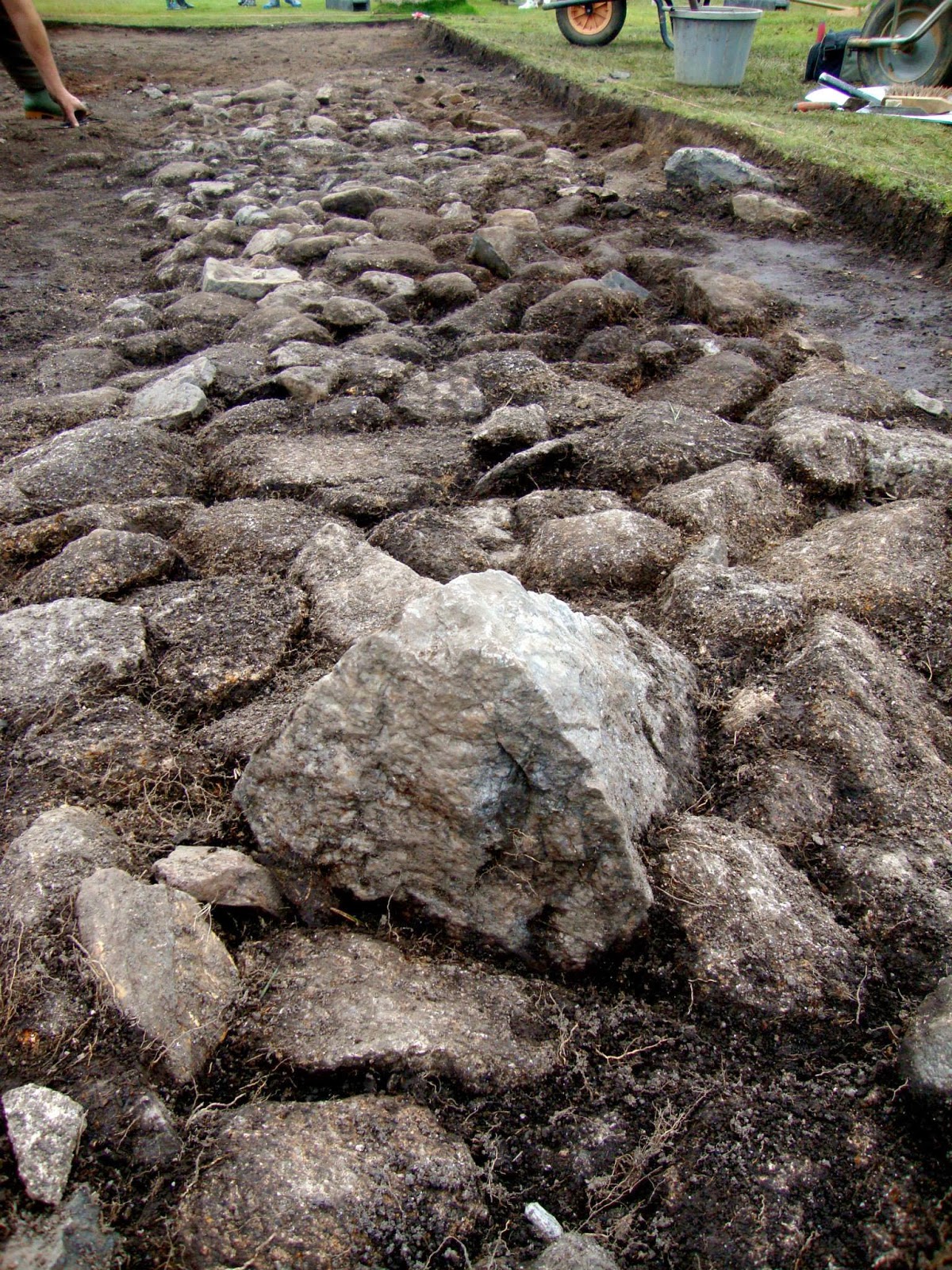 Geologist Calum Beeson has suggested that this upright stone was once encrusted with black crystal, leading to the nickname 'crystal pyramid' during the dig. A full Geological report of the make up of this and some of the other stones will be forthcoming. The ‘pavement’ aligns directly to Rillaton barrow, former home to the wonderful Rillaton Cup, now housed in the British Museum. The dig has discovered that the ‘pavement’ does not directly join the two stone circles, and there seems to be a gap at each end. It is, however, widely thought to be part of the ceremonial architecture of the site, and two prehistoric stone tools were discovered alongside the ‘pavement’. Dig director James Gossip has said that samples taken from underneath the stones will be sent off for radio carbon dating, to help to verify that the ‘pavement’ is contemporary with the stone circles. The week long event also held a ‘lighting up the monument’ evening, where a team of archaeologists and astronomers spread out across the ceremonial landscape around the Hurlers with powerful torches and using radio contact they managed to get a wonderful overview of how each ancient site related to each other and how they may have looked in the distant past when used for ceremony. Some photos of this can be viewed on www.macastrofix.info/?q=node/54.

Other discoveries during the week long event included a stone row north of the Hurlers (SX 25777 71812), where the stones are spaced apart about 8 to 10m in two parallel rows. The stone row aligns towards Kilmar Tor on a bearing of about 355 degrees. Dig geologist Calum Beeson pointed out that the stones in the rows had been selected and placed so that their inner faces were covered in a black mineral layer called wad, which sounds very similar to the ‘pyramid stone’. There is much information to wait for now the dig has finished, and whatever we may think about this very special ancient landscape monument, and wider ritual landscape, I get a strong feeling that we are in for a few surprise.

Article first published in Meyn Mamvro No. 83 Winter/Spring 2014. Thanks to Andy Norfolk for the information on the parallel stone rows.
No comments: