Carwynnen Quoit: the Restoration of a Ruined Megalith

This report was first published by Heritage Action's Heritage Journal and is reprinted here with their kind permission. Heritage Action is an organisation dedicated to preserving our ancient heritage by protecting the ancient sites of Britain and Ireland. See www.heritageaction.org for further details.

Carwynnen Quoit: the Restoration of a Ruined Megalith

A Report by Alex Langstone

Carwynnen Quoit is one of the few Cornish portal dolmens to be found outside the Land’s End peninsula of the Duchy. The quoit lies in a field and, at present is nothing more than a collapsed jumble of stones.

The monument fell down in 1842, but was re-erected shortly afterwards. However the mighty monument fell again during an earth tremor in 1967, and has since been largely forgotten. The quoit belongs to the Penwith Chamber Tombs category of ancient monument, and dates to the Neolithic circa 3000 BC. Also known as The Giant’s Quoit or the Devil’s Frying Pan, it would have had a similar appearance to Lanyon Quoit, sited a few miles to the west, close to Land’s End. 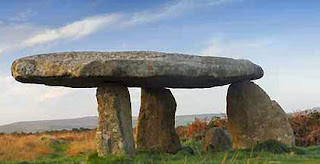 The capstone formally stood on three supports standing 1.5 metres high, and the monument was formally owned by the St Aubyn’s Pendarves Estate, where it was known as the “Cromlech Park”.

A meeting of the Camborne branch of the Old Cornwall Society was held at the stones in the summer of 1925 and the Bards of the Cornish Gorseth held their annual gathering at the quoit in 1948.

The Sustainable Trust, (a small, locally based environmental trust) have now purchased Carwynnen Quoit, along with the five acres of land surrounding it. Their long term goal is to restore the monument to its former glory and have just had a geophysical survey carried out to see what may remain below the surface. The group are hoping to re-erect the monument without the aid of any mechanical assistance, which in turn, may give us a better understanding of how our ancestors built these monuments in the first place!

Depending on what archaeology is present, a strip may be planted with indigenous trees to extend a wildlife corridor between two close by adjoining woods. The Trust are aiming to design the area around it to provide an appropriate setting for the Quoit based on how the area may have looked when it was first erected. They are working closely with Historic Environment Local Management; an English Heritage led project providing information, training and guidance to ensure this is done in a sensitive and responsible manner. Also involved are Cornwall Heritage Trust, Cornwall Archaeological Society, Heritage Environment Service and the Cornwall Archaeological Unit.

Pip Richards, director of the Sustainable Trust, said “Bear in mind that phase one is only just under way:- the purchase, establishing a database of interested folk and bringing education to and involving a wide cross section of the public. We will form a group to fund phase two. The Heritage Lottery Fund have agreed in principle, but will probably need a series of further events associated with the re-erection. Patience is required.”

The Stone Circles of Cumbria

A great new lavishly illustrated guide to the stone circles of the English Lakes has recently been published. It fills a huge gap in the market, and as I have recently returned from the region I thought I would review the work for posterity! 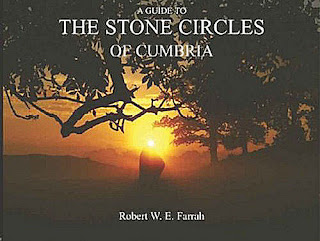 A Guide to the Stone Circles of Cumbria
by Robert W. E. Farrah

This new guide book is an absolute gem. Loads of photographs and references, including map references are given to all the major and lesser known stone circles of Cumbria. The author talks about the sites within the wider context of the sacred landscape, and writes with passion and knowledge of his subject.

Site plans are included, both from the past, and new ones and detailed information is given on how to get to each site, which is essential for the more remote monuments. 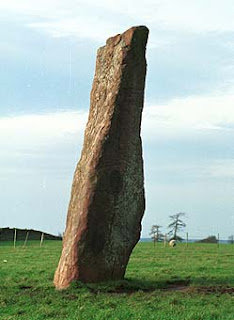 New interpretations are discussed and landscape alignments put to the test. The only downside to the book is the physical size of the volume, which prevents it from being taken out in the field! For anyone wanting to explore the ancient past of the Lake District, this book is a must, and for folk interested in the Earth Mysteries of Cumbria, it is a welcome publication.