Brand new poetry anthology Lucifer Bridge has received a fantastic review in the latest issue of The Mirror of Isis. Click here to read the review. To celebrate, here is one of the poems from the book reproduced below along with some great illustrations, which are not in the book, but fit nicely with the themes of the poem. 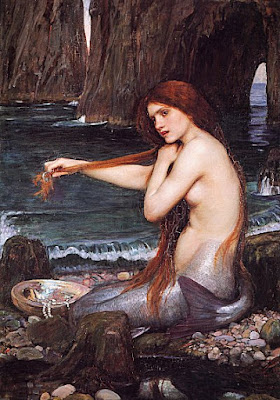 With outstretched wings
The girl flies near
Hunting dinner
She instills loathing fear!
Art Deco splendour
All around
Fading into oblivion
Without a sound...

Sea Girl rises
Arise with thee
From the watery depths
She follows me
Around the dockland
With a deathly cry
I take my leave
From the home of thy!

Hidden Nature
Within all of me
My heart-song quickens
With intensity
Insanity creeping,
Creeping round
Whilst the Sea Girl
Feeds on insanity found!

With your stretched out wings
And your fish-like tail
Beautiful Sea Girl
Morphs on the wind and waves
Mythological creature
From the deep
By the Celtic Sea,
She seems never to sleep. 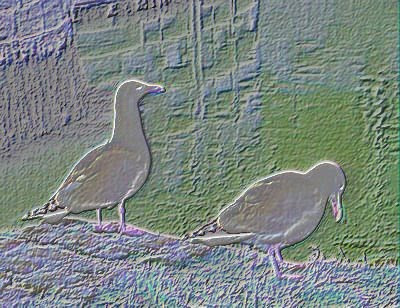 If you enjoyed the poem, there are 29 others waiting to be discovered in Lucifer Bridge, along with stunning artwork and photography by some of the most talented contemporary occult artist in Britain today.
Click here to buy Lucifer Bridge now

Above: St. Guron's Holy Well Gargoyles
The Holy Wells of Old Bodmin Town
by Alex Langstone
The highland granitic expanse of Bodmin Moor covers much of North East Cornwall, covered with hundreds of ancient archaeological sites; standing stones, cairns, stone circles and hut circles, the moor attracts visitors who want to explore the ancient landscape, climb the highest hills in the Duchy and enjoy the vast wide-open rugged vistas across moor, heath and valley.
Not so well known is the old town, from whence the moor takes its name. Bodmin has a long and distinguished history. St Guron founded a monastery here in the 6th century and shortly afterwards St Petroc arrived and took over the holy spot, where the church now stands. Today the town still boasts the largest parish church in Cornwall. The church is dedicated to St Petroc and is largely 15th century. Interestingly the church still contains the ivory casket of St Petroc, which held the relics of the founding saint at least since the 12th century. The relics were stolen in 1177 and taken to St Meen's Abbey in Brittany. Henry II intervened and the relics were returned in the ivory casket that can still be seen today! This historic event is commemorated every year at the Bodmin Riding ceremony held at the beginning of each July. The town's name comes from the Cornish "bod" (dwelling) and "monegh" (monks). A direct reference to the importance of the settlement in its early days of ecclesiastical power. It is very likely because of this religious status the early town enjoyed that the many ancient holy wells, most which pre-date Christianity, have survived around the quaint and historic town. The town's priory park contains a few remains of the old Bodmin Priory including the Holy Well of St Petroc, which is the first of the town's Holy Wells we shall visit. 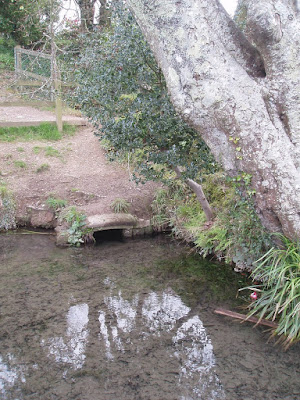 Above: St Petroc's Well, Priory Park, Bodmin
This beautiful old well is situated at the edge of the town's Priory Park, close to but hidden from the town's football club. The well is sited in a hollow, beneath a copse of Oak, Ash, Holly and Hawthorn. The water level is normally very high, due to some previous flood alleviation works, covering most of the seventeenth century granite arched well basin. A statue of the Virgin was found here during restoration work, and was restored by the monks at Buckfast Abbey, before being presented to Bodmin's Catholic community. It now resides in the town's St Mary's church. This Holy Well would have originally served the once great Bodmin Priory, and the spot still exudes a sense of mystery and wonder, and is a peaceful spot for reflection. 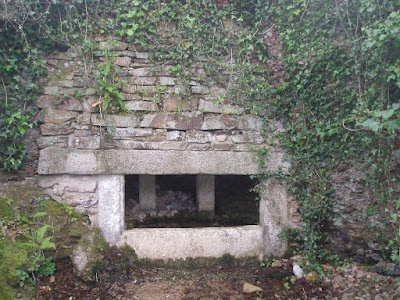 Above: Scarlett's Well, Bodmin
Scarlett's well, is another of Bodmin's peaceful and secluded holy wells. A mineral rich healing well situated by the beginning of the Camel trail on the edge of town. The site is set back into an Ivy clad bank, where a spring gushes forth from the hillside and flows into a granite trough which holds the water briefly before it continues its flow towards the bubbling stream which meanders along the valley floor towards the larger River Camel and beyond to the Atlantic Ocean. This site is very beautiful and peaceful. The well was once part of the Priory of Bodiniel and has many stories of healing and miracles associated with it. Joan Wytte of Bodmin was a witch, known in her day as the fighting fairy woman of Bodmin. She is reputed to have used the well for scrying and healing. Another Bodmin wise woman, known as Old Nell also used the wells mystical waters to aid her cures, and  her old water pitcher can still be viewed in The Museum of Witchcraft and Magic in Boscastle. 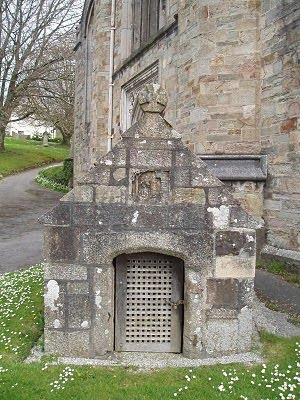 Above; St Guron's Well, Bodmin
St Guron's well sits in the churchyard of St Petroc, by the lofty parish church. A fine granite well house completely encloses the sacred spring, but the waters can be accessed below where the holy spring water issues from the mouths of two impressive gargoyles. The water is contained in an animal drinking trough, before it disappears beneath the modern roads of the town centre. Other town centre wells include the Bree Shute well which was also known as the eye well, and Cock's well, which once served the town's farrier. Bree Shute was famed for curing sore eyes, and a plaque above the well still reads Eye Water. A modern doctors surgery now sits opposite this healing well, a continuation of the wells curative powers maybe? 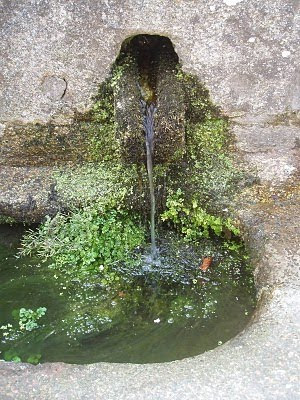 Above: Bree Shute Eye Well
Cock's well is now unfortunately dry, but was once renowned as a drinking well, it sits on the corner of Chapel Lane and Dennison Road. The name of this well maybe a corruption of Couch's well, as nearby Couch's Lane leads from the well up to the historic Bodmin family home of the Quiller-Couch's. An interesting piece of local history for sure and one with particular meaning regarding Cornish holy wells. 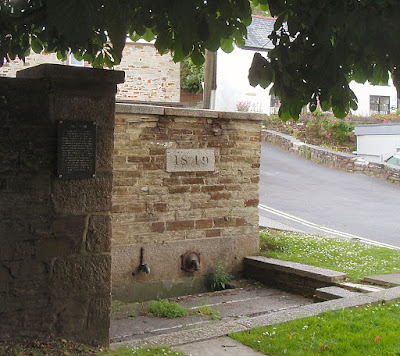 Above: Cock's Well, Bodmin
There are several lost holy wells around the town. There was the Bodmin Holy Well, which was situated about a mile away from Scarlett's well in Fairwash Combe. Thomas Quiller-Couch has this to say about this ancient sacred place:
"A mile or so above Scarlett's well in the Fairwash Combe, is the clear and perennial fountain, still giving its name to the field in which it is situated. The well is not now, if it ever was, enclosed by any masonry; but the limpid stream runs into a granite trough, the overflow irrigating the grass below. It had great repute among the dead and gone of Bodmin; still the aged retain some remembrance of it, and tell me how in their youth they used to frequent the Holy Well to divine their future by rushes from the marsh below tied crosswise (with a now forgotten verse) put to float on the water. On a recent visit I searched for votive coin or pin, but found none. Hydromancy is dead in this generation."
from Ancient and Holy Wells of Cornwall by Thomas Qullier-Couch 1826-1884.
The Well of the ost holy well is reputed to have been in the grounds of the Holy Rood chapel on a wooded hill overlooking the east side of town. This leafy modern cemetery contains many mature trees along with the picturesque16th century Berry tower which is all that remains of the Holy Rood chapel. An ancient Celtic wayside cross stands by the tower. This was moved here in 1860 from its original site on Cross Lane at the junction of Berry Lane. The site of the Holy Well is now, unfortunately lost. 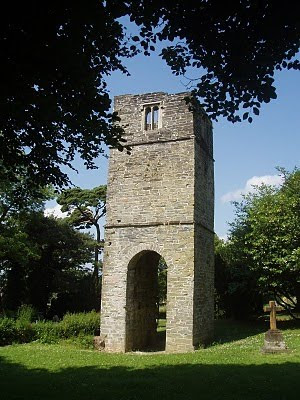 Above: Berry Tower, Holy Rood, Bodmin. Site of lost holy well
The lost holy well of St Nicholas was sited opposite Bodmin central Railway Station at top of , and the final lost well of Bodmin is St Leonard’s Well. This holy well once served the original ’s Chapel, and now sits in a private garden. 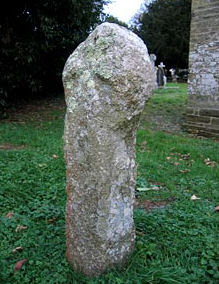