To counterbalance the ever present negative media-hype of Halloween, and the often hideously corrupted traditions that this modern secular and trashy festival now entails, I have written this piece to allow a glimpse into the true meaning of this ancient and very sacred time of year.


Samhain: Remembering the Dead
Prose and Meditation to Honour our Ancestors
by Alex Langstone

The ancient Celtic festival of Samhain. Time of remembrance and of honouring the dead. The season when the veil is thin and contact between the great divide can be made. The ancient feast is still celebrated throughout the western world as the secular festival of Halloween, on October 31st. However it is only a distant and very corrupted memory of what this sacred festival is all about. It is interesting to note that in Britain, Remembrance Day on 11 November seems to tie in symbolically with similar themes and the bonfires lit on 5th Nove 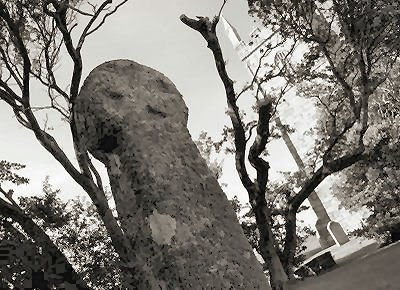 mber to commemorate Guy Fawkes' failed act of terror have without even realising it, become a modern secular continuation of the sacred Samhain fires. The Christianised festivals of All Saint's Day and All Soul's Day are celebrated on the 1st and 2nd November respectively. In the Goidelic Celtic languages of Scottish Gaelic and Irish, Samhain means November, and the entire month resonates with the meaning and symbolism of the ancient festival. In Cornwall the feast was known as Allantide, or Nos Calan Gwaf in Brythonic Celtic Cornish. Penzance particularly had the custom of giving Allan Apples, large red apples to each other on October 31st for good luck and this custom persisted until the late 19th century. Turnip lanterns were made and lit after dark and stories were told about the ancestors and the otherworld of faery folk and enchantment!

Samhain is about remembrance, communication across time and space and especially honouring our ancestors and remembering our deceased loved ones. It is also a transition point in the yearly cycle. Winter is just around the corner, the harvest is complete and longer nights and shorter days are upon us. The sun's power is waning and leaves are falling from the trees. In modern Ireland and Scotland, the name by which Halloween is known in the Gaelic language is still Oíche/Oidhche Shamhna, and it is still the custom in some areas to set a place for the dead at the Samhain feast, and to tell tales of the ancestors on that night. The of opening a door or window in the west for the beloved dead, who are specifically invited to attend, is central to this ancient custom. Many leave a candle or other light burning in a western window to guide the dead ancestors home. Divination for the coming year is performed, and this is a time for deep communion with God, Spirit or the localised deities of the district, especially those whom folklore mentions as being particularly connected with this festival.

Samhain Prose.
Crows crowing, flapping somewhere overhead. The wind cries the ghostly song of the departed. We stand alone in this desolate, yet welcoming place. It is cold, and dusk is laying her blanket over the rolling landscape of sweeping, undulating hills. The naked twisted trees dance in the half-light of a cold autumnal evening, and vicious clouds scud across the menacing sky.

Old ossifying bones lie hidden here. The bone-yard of the ancient ones lie sleeping in this valley, and the ancient mortuary house holds the key to this place. Half buried under four thousand years of mud and stone - but only half-buried, still! 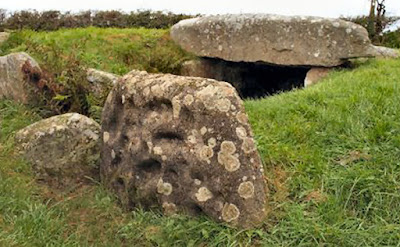 Whispers, half forgotten whispers from the dimming memory of yesteryear. Whispers fade in and out, blending, melding 'twixt the winds playful movement 'neath the trees. We can almost taste the past here! Fleeting and unknowable, but tangible and contradictory. All of this and more. Scattered shards of invisible bone. Ghostly hair, tooth and nail hide here amongst the invisible remains of last years decay. New life sprouts, mushrooming fungus and multi-coloured lichen have successfully colonised this enclosure.

This space, this sacred area of the deceased; the departed ones who haunt another realm, an inaccessible realm of half-fulfilled dreams and visions of poets and painters from across the ages.
Ancient prehistoric lines of power converge here. The shining pathways of the ancestors, corpse roads and coffin paths where we walk with the dead.

It is dark now, and the Yew tree observes all from the darkest corner of this enchanted world. This is the ancient, wise and cunning you!

Tree of departed souls, tree of renewal, guardian tree of graves. The old twisted branches rustling and creaking in the ghostly vale of dreams. Associated with immortality, renewal, regeneration, everlasting life, rebirth, transformation and death.The Yew is considered to be the most potent tree for protection against evil, a means of connecting to your ancestors, a bringer of dreams and otherworld journeys and a symbol of secret ancient magic. In hot weather i 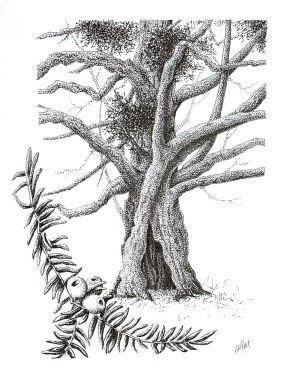 t gives off a resinous vapour which our ancient far distant ancestors inhaled to gain visions. Yew wood was regarded as especially magical to the Celts, due to its connection with the dead and the ancestors which were deeply respected. Let the lesson of the Yew be observed - welcome travellers!

Samhain Meditation.
You find yourself standing in the corner of a churchyard by a huge ancient Yew tree. Its hollow trunk, gnarled and split with age, appears like a gateway leading us into the night! A crescent moon illuminates the darkened sky and the stars glisten. This is a thin place! Allow yourself to be guided along the shimmering old straight track, from the thousand year old Yew tree and it's surrounding grave-stones we walk along a well defined path. This ancient corpse road follows an even older line of earth energy and it has a purposeful and meaningful destination. An owl screeches and a rustling is heard in the nearby undergrowth. Nocturnal creatures are busy. Old fashioned lanterns light our way towards the hill of the dreaming dead. Ancient standing stones pierce the landscape, and wayside wheel-headed crosses lead us to our enchanted destination.

A fire is burning on a nearby hilltop, a bonefire! The assembly cast the bones of the Samhain feast into the blaze, remembering and honouring around a beacon fire, burning into the nights darkness, lighting a pathway into the dreamtime of the departed. But this is not our destination, we have a date with a more ancient edifice. We continue along the faintly illuminated trackway leading us deeper into the immortal starry velvet night. We walk through ancient woodland, its trees stark against the night. We are heading into Bone Valley. A deeply connected and primitive valley. A place of antiquated trees and antediluvian secrets. Bone Valley will soon divulge our holy destination. The moon's crescent appears once more between the protruding branches, which seem to reach out to the night sky. The clouds have dispersed and bright stars shine like timeworn torches in an antique indigo sky. Soon we arrive at a clearing and we see a stony structure, megaliths protruding from the earth. They are curbing a large oval mound and beyond the stones, through a well worn entrance, we find a gaping black opening leading into a stone chamber. Some of the stones have been carved and round indents cause the surface of one stone to stand out, its quartz veins shining, illuminated by the pale moonlight.We sit within the confines of the barrow's heart. We listen to the silence. We light a solitary candle. We pray for the loving departed.

We emerge from the otherworldly chamber of the neolithic shrine to the dead. It is dawn, and the eastern sky is glowing an iridescent red. The sun is rising, lighting our way home. We follow the pathway back to the source of our deamtime adventure. past the bonefire hill, along the old straight track which leads through the heart of the November woods and the ancient sacred Yew. We take leave of this place, with its needles of stone and its earthy shrines to the dead. We find ourselves in a churchyard, amongst the gravestones, the sun is shining and the crows forever crowing. We are home. We remember! 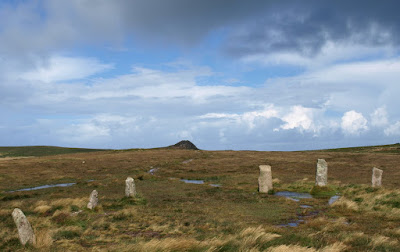 "Natural England has confirmed that plans to graze and fence the Nine Maidens common have been abandoned" and that the commoners had decided not to apply to the Secretary of State for permission to stock proof the common. The HEATH Project assistant project manager said that "they were disappointed but supported the commoners'' decision. The co-ordinator of Save Penwith Moors said that it was brilliant news "but it remains to be seen what hap 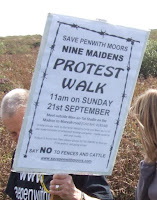 pens with the other areas" and that he hoped their campaign had gone some way towards achieving this result.

Thank you for your support in achieving this excellent result. There is still more to do.

Ross Champion, HEATH Project Manager, was quoted in The Cornishman of 25th September that: “Change is a no-no in West Penwith and some people will do their hardest to make sure things stay the same. But if there’s a common consensus and people don’t want it, we’re not going to go ahead and just do it.”

So please now write or email to Natural England expressing your opposition: Photo (right) from the protest walk on 21st September.

With thanks to Ian Cooke, Save Penwith Moors coordinator for the information. To view the latest see here 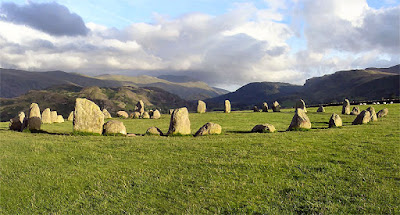 Written Within View of Castlerigg Stone Circle has been featured on the Megalithic Poems website. See here and here.

Megalithic Poems is an anthology on the theme of the megalithic structures of Britain, Ireland and the European Continent: structures found at places like Avebury, Stonehenge, Newgrange and Carnac.

Don't forget to check out Lucifer Bridge for all the latest poetry updates.
1 comment: