May Day Matters in West Cornwall 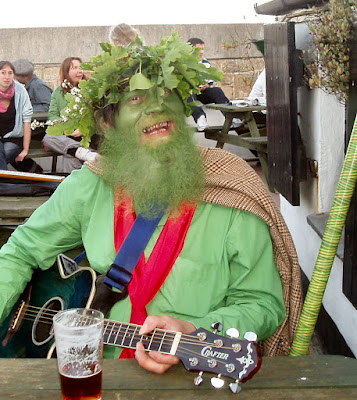 A Report by Alex Langstone

The ancient custom of the Penzance May Horns and Whistles was vividly brought back to life on Sunday May 4th 2008. Using many of the old customs recorded in Robert Hunt's Popular Romances of the West of England, the people of the West Cornwall town took to the streets.

The days celebrations started with a walk to Trereife Park, where a Beltane picnic was shared amongst the beautiful backdrop of bluebell woods and rolling parkland. Trereife House was one of the traditional places that the folk of Penzance called at on May morning to gather greenery, flowers, rum and milk, and to make May Sycamore Whistles before returning to the town, dressed in the greenery of the forest blowing their whistles to greet the May. 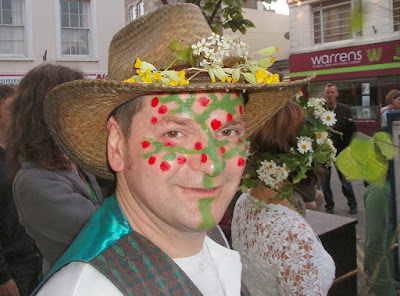 This event was an annual celebration prior to 1933, when Penzance Borough banned it for being too noisy and rowdy. This years historic Beltane celebration is all set to mark the return of the Penzance May Horns to the folk calendar of West Cornwall.

The main event of the day was the procession beginning at Newlyn Green. Participants gathered at the nearby Tolcarne Inn overlooking the spectacular Mounts Bay. About 40 people gathered in the beer garden, where we were greeted by the May Green Man.

The procession was headed by the Master of Ceremonies Mr Dennis Dowrick, followed by the Turkey Rhubarb Band, The Green Man and Lady of May. Fi Read; the current Mock Mayor of the Quay was also in attendance plus one or two familiar faces from the Druid Grove of Bega plus many other friendly faces.

As the procession neared the Penzance parish boundary from Newlyn, a brief talk was given about the last time the May Horns celebration had taken place in the 1930s, and mention was made about the town councils decision to ban the event - a ban that is still in effect today. So once we were over the river that forms the towns western edge we were illegal.

Despite this, the defiant revellers continued along the prom, and then up through Alexandra Road, and into the town centre, where at the historic Green Market the may pole was ra 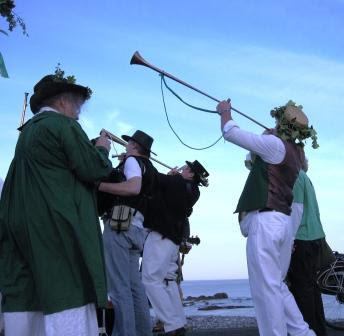 ised and frantic dancing and laughter was witnessed at this traditional May Pole site for the first time in 70 years. Many more people had spilled onto the streets by this time, enticed out of the nearby pubs by the music and laughter, and soon more had joined the final part of the Sacred May procession.

The final leg continued to the ancient and historic Chapel Street district, and to the Admiral Benbow, one of the towns oldest hostelries, where the upstairs bar was opened for a party. Cornish folk dancing and music was on hand to entertain, and proved to be a fitting end to the towns revived Beltane celebrations. I sincerely hope that this is the first of many, and that many more will join in the fun next year!