The Medieval Church our Pagan Heritage 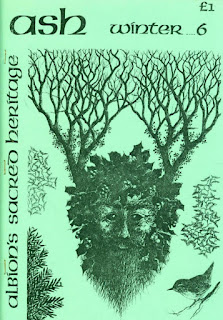 Here is another superb article from the ASH Magazine archive. Published in ASH Magazine no. 6 Winter 1989. Written by leading writer and researcher on ancient mysteries and folklore Bob Trubshaw. Bob's Heart of Albion Press has published many excellent books on alternative thought over the years. Check out their website for details. www.hoap.co.uk. The illustration of the snowy cross scene by Jim Kirkwood was printed with this article in ASH, and is reproduced here for completion. The sketches of the Thorpe Arnold carvings were drawn by Dave Hunt. The green man painting is by Yuri Leitch. The photographed green man is from Southwell Minster, Nottinghamshire. The last two illustrations were not part of the original article, but have been added for reference.

The Medieval Church, our Pagan Heritage
by Bob Trubshaw.
Written history is always from the pen of the victors and never more so than when the conflict is over faith and dogma. But the evidence of historical objects can sometimes clash badly with what history books try to tell us. Many churches have traces of Saxon or Norman carving. The relevant church guide books will proudly boast that the Christian faith has been followed on that site for eight hundred, nine hundred or even a thousand years. But there are also a greater number of churches with carvings of the medieval period which display motifs which have nothing to do with Christian teachings and everything to do with the old nature gods. 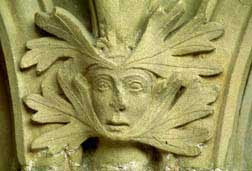 Many of these can be tentatively dated to the thirteenth and fourteenth centuries, although similar carvings are clearly the efforts of Victorian restorers to 'restore' or copy these features. Although the older carvings are often among the best features of the church, the guide books rarely draw attention to them. This is so consistent one begins to suspect a 'conspiracy of silence' among church recorders and historians. Whether deliberate or not, any historian working only from written sources would entirely miss these impressive and widespread features.

What sort of carvings are so neglected by the churches' historians? Not the splendid Norman tympana and fonts which depict a soldier-cum-saint figure dispatching one or more dragonian beasts. These fit in neatly with the idea of St Michael, or another of the host of canonised dragon-slayers, putting paid to the forces of evil. It is beyond the scope of this article to argue why the carvers of such scenes would know by heart the Norse tale of Odin slaying the Midgard serpent, or those tales of Celtic heroes such as Beowulf and Llud dispatching local dragons, as have come down to us in the Welsh Mabinogian and Irish Celtic lore.

It is the term 'grotesque' which obliquely alludes to the figures which history disfavours. Grimacing gargoyles around the roof of the tower are, according to more than one parish guide, an illustration of how the forces of evil have been banished to the outside of the church. But why do so many naves and even chancel arches display corbel heads with similar features?

The most easily recognised pagan influence is where a man's head is not only surrounded by foliage but has branches sprouting from the mouth or nose. These are invariably recognised for what they are - Green Men, the Old God of fertility and rebirth.

Another for of these old gods was the Horned One, often known as Herne the Hunter. So far I have not discovered any stag-antlered heads but there are several with short cow-like horns. Many more look similar at first glance, but turn out to be faces with long ears. It may be that the ears are the result of later modifications to an over-provocative figure. 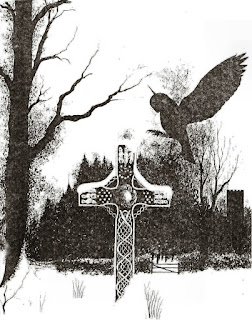 Among the most hideous faces are those which are, literally pulling faces - with both hands, or occasionally only one, stretching the mouth. In the north of England until comparatively recently, face-pulling or 'girning' competitions were held. 'Girning' gargoyles - human and bestial - frequently repose around the roofs of our churches. There are also several excellent examples on the corbels within the naves of other churches. One church guide describes such a figure as 'a man with toothache'. But a less fanciful interpretation is that these faces appear to be a polite version of the Shiela-na-gig carvings, otherwise known as female exhibitionists, who evoke images of their fecundity by using their hands in a similar way to prominently display other parts of their anatomy.

It would be too much to expect the survival in a church of any carving whose masculinity was too obvious. But, just as the girning faces may be a polite version of female exhibitionists, so tongue-poking faces can be seen as the counterpart for the male. One of the four faces on the Norman font at Greetham in Leicestershire has a descending tongue whose length is as great as the face. The many medieval examples of tongue-pokers have less extreme anatomical distortions.

My superficial interest in such carvings was brought into focus a year or two ago when I read Guy Raglan Phillip's The Unpolluted God. Pert of this deals with a survey of ninety-nine churches throughout Britain and discusses the importance of carvings such as Green Men, face-pullers, ram's horns and about the pre-Christian origins of stone altar slabs, north doors and much else.

Phillips was most surprised that, not only were such carvings mad at least as late as the fourteenth century, but so many have survived various restorations and deliberate and literal ecclesiastical iconoclasm. It raises the question - when did England become Christian? Many of these pagan-inspired carvings appear to date from the 13th to 14th centuries, which is well after the time the royal court, and therefore the higher nobility, had accepted Christianity. But how deep did this acceptance go? As late as the fifteenth century the Divine Right of Kings, a distinctly pre-Christian concept, was still being invoked. If the nobility of the land still believed in a combination of old and new faiths, we can be sure that the common folk held onto beliefs and lore which had, at best, a superficially Christian appearance.

There is evidence to suggest that from the seventh century there was an attempt to forbid worship at sites other than churches. This was a simple law to circumvent the followers of the Old Faiths simply built images of their gods into the churches. The pre-reformation churches abound with images of gods - old and new together, and probably more of the former until the cult of the crucifixion slowly emerged in later Medieval times to dominate all the old rood screens, built to divide the chancel from the nave. 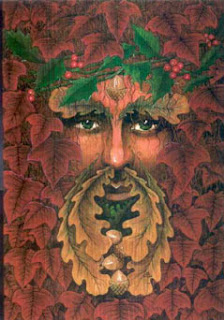 It was only in the sixteenth century that the church began to attack the beliefs of the common people. Witch trials have been a subject of fascination to many people. The trial records cited by Murray make it clear that quite often the leader of the witches' celebrations was the local priest, which suggests that the clergy of the sixteenth century were willing to support the spiritual requirements of their parishioners in a more enlightened manner than the dogma of the One True Way should allow. This indication of the rift between the senior, witch hunting clergy, and the 'grassroots' priests more than allows an explanation for at least the survival, if not the creation, of images of the old gods in churches.

Slim though the evidence is it seems that veneration for these old gods had remained more or less close to the surface of Church worship. Consciously or otherwise the incumbent allowed the old beliefs of his congregation to e more or less explicitly sustained.

In spite of all the efforts during and after the Reformation to rid the church of its all-too-visible pre-Christin roots, the current Anglican liturgy is still a rich source of survivals of the old faiths. Perhaps the clearest instance is the rite of baptism - petitionary prayers that but for a word or three would be spells supported by the sacred names of the old gods, with the timeless use of water and a candle that owes nothing to Biblical precedent and everything to what the self same Vicar might slander as 'Devil worship'.

History as the Church would want us to know it, is that the missionaries came and entirely novel religion took root and rapidly flourished with the prompt demise of any old faiths. History, as read between the lines, and by what physically survives, is that the missionaries came and adapted the sites, the festivals and the rite of the old faiths as little as possible. the new god's annual resurrection was a familiar concept. That He died to redeem everyone from sin and evil were a bit too intellectual compared to the more direct and tangible roles of Saxon deities.

The recent pagan revivalists may feel, with some justification, to be cast in a them versus us battle with the Church, but that should not blind us to what the Church's buildings tell about their history. Throughout Britain there are many reminders that followers of the old faiths were deliberately made to feel welcome. To what extent the medieval clergy practised a tangled web of old and new religions is now impossible to unravel, but I at least suspect that the reality owes little to what most history books try to sell us.

The illustrations to this article (right) are of the carvings in St Mary's church at Thorpe Arnold, Leicestershire (OS sheet 129: 770201). This hill-top church, surrounded on two sides by earth 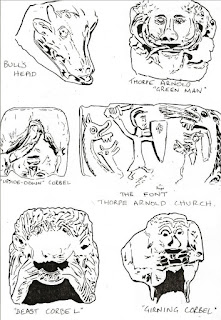 works of unknown age looks out over Melton Mowbray and the Wreak valley which has one of the highest concentrations of Viking place-names in Britain.

There is a Norman font depicting a sword-wielding man fighting five dragons (or are there two multi-cephalic beasts?). Nearby is a capital with a sun-burst face and a tongue poking face (not illustrated). Most interestingly there are eight superb corbels supporting the nave roof. These were probably carved in the thirteenth century. These include two girning faces (one human, one bestial), a green man, a horned cow and an intriguing figure with his upside down face appearing between his legs; an ambiguous feature on this carving could allow him to be interpreted as a well-endowed male exhibitionist.

Most of these motifs can be seen elsewhere in Leicestershire but Thorpe Arnold provides for the pagan church carving enthusiast the best example in the county for 'one stop shopping'.

Thanks to Caroline Wise for the information.

A slightly shortened version of the same article can also be found in the ASH Magazine archive.
No comments: