Montol and the Lord of Misrule

In this article, Alex Langstone looks at some of the folk traditions surrounding Christmas and the New Year, and links them to ancient esoteric mystical practises in Britain and Europe both in the past and very much in the here and now.

Montol and the Lord of Misrule
by Alex Langstone 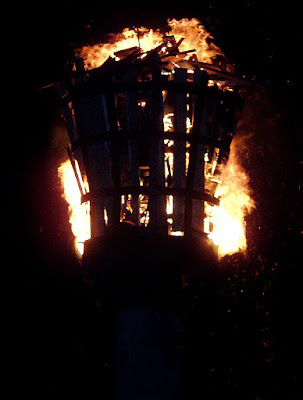 The Christmas traditions we are used to today are largely the invention of Victorian society and early 20th century advertising! Before this time, Christmas was only observed in church, and much of the pagan mid-winter traditions that have become mainstream today, were largely forgotten. In Yorkshire, Wales, Cumbria, and Cornwall, however there were Chistmas and mid-winter folk-traditions stretching back hundreds of years, with many traditional folk-carols, music and rural traditions connected with the birth of Christ and the winter solstice now being revived. In Cornwall some Christmas church services now include the ancient traditional carols, and at the recently revived Montol festival in Penzance, a special choir has been formed to sing these Cornish folk carols.

In Yorkshire, many pubs now encourage the singing of folk carols at Christmas, and in South Wales the festival was known as Y Gwyliau, and would often be the only prolonged holiday in the year when most of Wales made merry to commemorate the end of the year and looked forward to the next one with all agricultural work grinding to a halt for this much anticipated season.

Native evergreens have been collected for decorating the home during the Gwyliau for thousands of years. Ivy, holly, yew and mistletoe have a mystical ability to produce fruit in the depths of winter and were a symbol of the eternal cycle of life on earth. 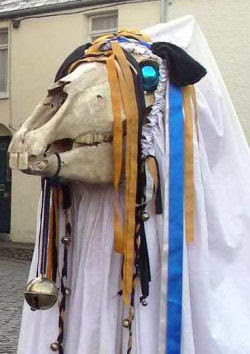 One of the most celebrated and terrifying sights to travel around the narrow alley ways and winding roads of South Wales was the Mari Lwyd. A horse's head, festooned by a white sheet, ribbons and bells with its jaws set in a trap to make that all important snapping; the Mari Lwyd is an integral and mythical part of the Welsh Christmas and New Year festivities.

Mari Lwyd (Welsh Y Fari Lwyd) translates as the Grey Mare and the horse is a highly significant animal or symbol in the mythology of Britain. Carried around Wales by wassail-singing groups of men, Mari Lwyd was an extremely popular figure in parts of south and north east Wales during the last century although the tradition has slowly died out and is today only performed in small pockets of Glamorgan.

The ritual of the Mari Lwyd begins with the singing of traditional stanzas by the Mari Lwyd choir, travelling door-to-door soliciting both permission to sing and to gain entry into the houses of the towns and villages. Ale and Cider would be given as gifts, and gradually the whole event would become a community merry-making party! A similar tradition can be found at Aberconwy, in North Wales, where Penglog, (Welsh language: head or skull) assumes a similar role. 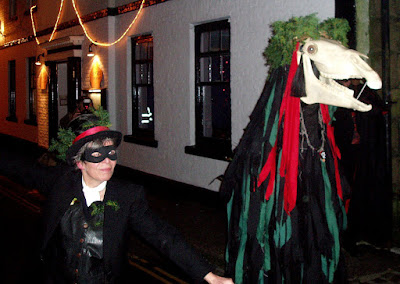 In Cumbria, the St Bees Traditional Mummers have recently revived Mumming and Guising around the pubs of St Bees on Christmas Eve and in Cambridgeshire the East Anglian folk-tradition of Molly Dancing at Christmas and the New Year is once again popular!

In Penzance, Cornwall the ancient traditional festivities have been revived as the Montol Festival. Montol is a Cornish word meaning Winter Solstice, and many ancient customs of Nadelik (Cornish language Christmas) have been incorpoated into the modern festival.

Christmas as celebrated by the Cornish prior to the Victorian era had much of the elements we see in the modern Montol. In particular the singing of Carol's (Christmas folk songs as opposed to Christmas Hymns), the lighting of the Mock or Cornish Yule log and its chalking or carving with a stick man symbolic of what has been lost, and is still to come. The candle dance and 'Obby 'Oss also form a central part of the festivities. 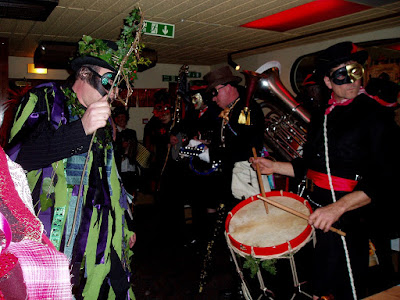 Guisers and Musicians in a Chapel Street Hostelry (Photo: Sarah Jenner)
Many from the diverse communities of Penzance come together for this celebration of balance and harmony. It is both a mystical and religious celebration, combining the pagan folk-traditions of old, with the traditional Cornish Christmas observance of the Virgin Birth. This truly is a time of year where old customs and religious observance become entwined and entangled,and Montol is a perfect example of this

Penglaz, the Penzance town 'Oss leads the torchlit candle dance, and Carols are sung up on the Iron Age hillfort above the town, aound the Solstice beacon fire. School children make lanterns, and many folk dress up in traditional guise of mock formal, topsy-turvy or mock tatters. This years festival included Mummers, ghost story telling, guise dancing and the iconic Penglaz, the Night Mare 'Oss of the old ways...

I mentioned in my article The Solstice Goddess of Penzance, about the links we can find between the iconic image of Penglaz and Robert Graves' classic folk-prose-epic The White Goddess, and the sovereignty of the land. Penglaz, as the Goddess of the Dark Winter truly comes alive at this fantastic festival.

The Lord of Misrule and the Christmas Fool
As part of the masking tradition a Lord of Misrule would have been chosen to oversee the revels. He is also known as The Abbot of Unr 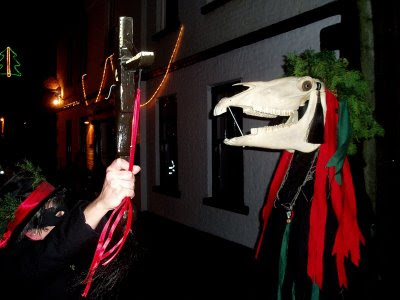 eason. Traditonally selected by the local community by some sort of lottery or game of chance, in many places this Lord would have been accompanied by other "mock" officials, such as the Mock Mayor, as happened at this years Montol festivities in Penzance, where Tony 'Mock' Blair, the towns official Mock Mayor was in attendance alongside the real Mayor and Mayoress and other dignitaries.

The figure of the Lord of Misrule is an ancient archetype, often refered to as the Christmas Fool , and he officiated over the great inbetweenness. The time of chaotic revery at Chistmas and New Year is the perfect in-between-time of the modern age, and so perfectly lends itself to this primordial archetype. He is often seen as the Horned God Capricorn, and he who turns the universe upside-down and bends time unexpectedly! Within this chasm of chaos, infinite possibilities briefly emerge and the modern concept of making new year resolutions maybe an ancient echo of this ritual of new possiblitites and fresh ideas! The Lord of Misrule was prelavent in the Roman rites of Saturnalia, which pre-dated the Christmas feast in ancient times. This feast held many similarities to the revived festivities in B 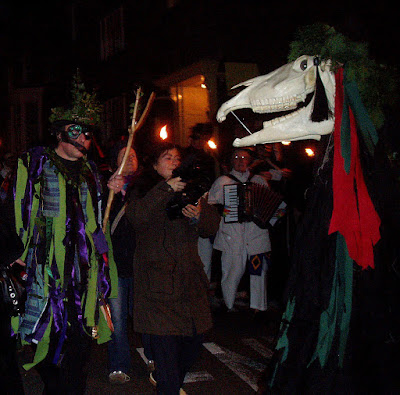 ritain today, including all social norms and constraints being cast away, whilst crowds gathered in the streets by the feiry braziers glowing warmly in the winter air. In 15th century France the Christmas Fool wore Asses ears, and was identified with Saturn.

The image of the Holy Fool liberates us all from the profane and mundane, and esoterically he is the Lord of the Night who sows the seeds of the future, whilst sailing upon the Ship of Fools across the landscape of our deepest dreams and desires.

In Cornwall the Lord of Misrule is known as Bucca Dhu, the dark face of the twin faced God of the Year. In Wales he is known as Pwca, and in Cumbria and Yorkshire he is the Boggart.


Montol 2008
This years festival climaxed on Satuday 20th December, after a week of mask making, Christmas late night markets, ghost stories and Mummers plays. The evenings festivities kicked off at St John's Hall at 6pm, where many school children had gathered with the beautiful lanterns they had made. Many people were in traditional guise costume, and the Turkey Rhubarb Band led the procession with traditional music of the Geese or Guise Dancers. The fire procession made its way up to the ancient Lescudjack Hill Fort above the town, where the children created a circle of lanterns around the Solstice beacon, which was set in the centre of the Iron Age Hill Fort. The Master of Ceremonies then said a few words, reminding us that it was the shortest day of the year, the Eve of the feast of St Thomas and that the ancient hill fort we were now occupying was fully in use at the time a child was born away in a manger! Here the Turkey Rhubarb band continued to play their traditional mysterious tunes, whilst Mock Tatters Guise Dancers from the Druid Grove of Bega danced their own peculiar Solstice D 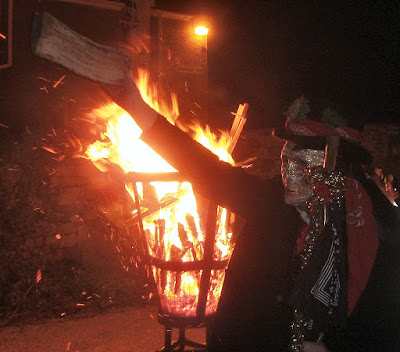 ance! The Lord of Misrule then danced around the circle before lighting the Solstice Beacon. The Montol Choir then took centre stage, led by Rev. Julyan Drew. The crowd was in for a treat, as many traditional Cornish Carols (Curls Kernewek) were sung into the sacred night.

Later in the evening Guise Dancing took place in Chapel Street, before the torchlit procession, led by the Golowan band, took shape from the Exchange gallery. As the torch bearers, musicians and guise dancers snaked their way down this historic district of old Penzance; Penglaz, the dark skeletal 'Obby 'Oss of Midwinter joined the magical prosession, led in a mystical trance-dance by Her teazer the androgynous spirit of winter's darkness Bucca Dhu.

Penglaz led us all to the final ceremony of the night. On the Sacred Headland, close to the docks, by the ancient shoreline; the Chalking of the Mock ritual was re-enacted. A serpent dance then weaved its way around the Winter Solstice fire, as Penglaz and Bucca Dhu mysteriously dissapeared into the primeval chaotic darkness of the longest night of the year.

With grateful thanks to the organisers of this fantastic community festival, without whom, Penzance would surely be a lesser place to be! Contact them here www.montol.co.uk