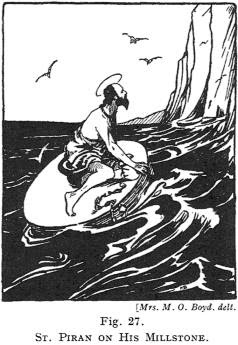 Ciarán was born on Cape Clear Island, Irish language Cléire, Co. Cork situated off Ireland’s south coast, in the sixth century AD where he was renowned for his miraculous deeds and his love of the natural world. Nevertheless, groups of Irish kings were afraid of his powers and were jealous of his influence amongst the people. On a wild and stormy day, Ciarán was chained to a millstone, and thrown from the top of a high cliff into the sea below. The blustery wind was blowing a deadly gale, the sky was black with thunderclouds and the dark stormy sea was a maelstrom, white with foam, and swollen with massive waves.

As Ciarán was hurtling towards certain death the sun broke through the clouds, and instantly the winds abated and the raging stormy sea became calm. As the stone hit the sea it floated, hundreds in the crowd above, seeing Ciarán alive on the floating stone, were immediately converted to Christianity.
Wind and weather remained favourable for our reluctant spiritual hero, and after many days at sea, Ciarán landed safely on the beach that bears his name today - Perranporth, the cove or harbour of Piran, on the north coast of Cornwall within the modern parish of Perranzabuloe.

In the vast, remote and lofty sand dunes, overlooking the Celtic Sea, Ciarán built a cell and a small church. His first converts to Christianity were a fox, a badger and a bear. The Cornish people flocked to him as news of his teaching spread. It is alleged that he lived to the age of 206, at which time he still had all his teeth, perfect eyesight and showed no sign of old age. He is reputed to have died in a state of drunkeness by falling down a well. Legend states that he is buried at his Oratory in Perranzabuloe, Cornwall. 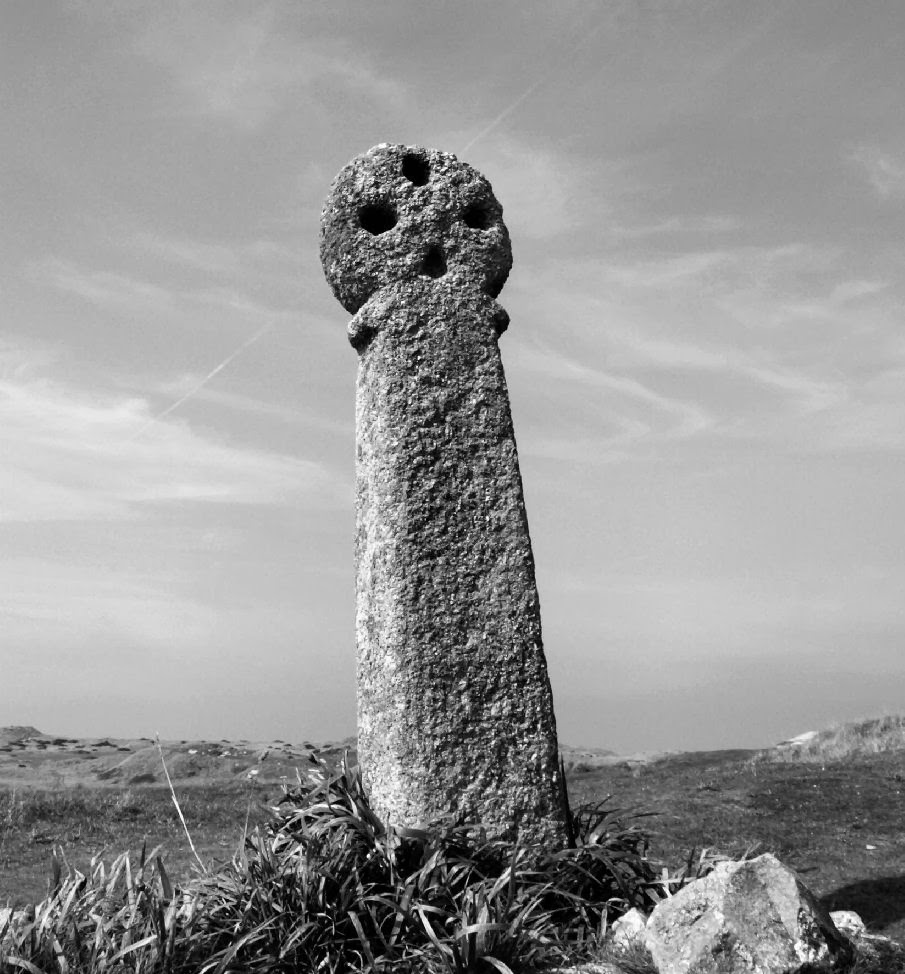 St Piran's Cross, close to the site of the
6th Century Oratory, Perranporth'

The etymology of Piran?
The letter C in Irish becomes P in the Cornish language. For example, the Irish word cenn meaning head becomes pen in Cornish, as in Pentire, Cornish language for headland. So it is easy to see why Ciarán became known as Piran in Cornwall.
Today St Piran’s Oratory lies within the shifting sand dunes. The Oratory has recently been uncovered by archaeologists, and it is hoped that the ancient building will be preserved and maybe future generations will be able to visit this incredibly important site of cultural and historic importance.

This once flourishing Celtic Christian community of Piran would have rivalled Iona and Lindisfarne in its size and stature. Nearby is the ancient wayside cross of St Piran. 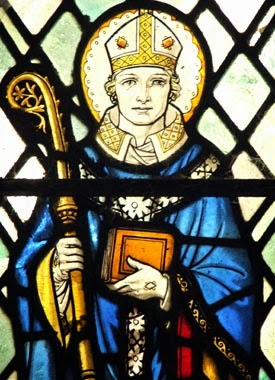 St Piran window from the medieval chapel of
Sen Pyran at Trethevy, Tintagel, Cornwall
These days St Piran is widely regarded as the patron saint of Cornwall and his feast on 5th March is a day of celebration across the Duchy and in Cornish Diaspora across the world.  His flag is a white cross on a black background, said to depict the moment that Piran discovered tin, which poured from his blackened hearth-stone and today the flag is proudly flown across the historic nation of Cornwall.