Some East Cornwall May Day Traditions

The Maypole Battles and Other Customs 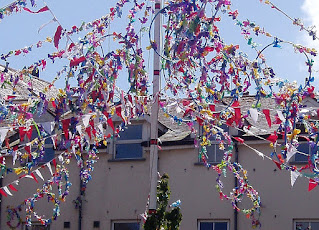 Many villages, hamlets and farms around Bodmin Moor and eastern Cornwall had a peculiar May Day tradition of the Maypole Battles.   At the end of April, each village would choose a stripped fir tree between thirty and fifty-foot-high and would fasten it to the highest chimney stack in their home parish at midnight on May eve. Alternatively, it would be attached to the highest tree in the vicinity. In the early hours of May Day, it was trimmed with streamers made of coloured scraps of material and with flowers and vegetables taken from neighbour’s gardens. The moment the pole was up and decorated, each village became a fortress, with other rival villages setting off on raids to try to steal the Maypole of the next village. At some villages, such as Merrymeet, the pole was cemented in and tarred, so it could not be climbed, but the men of St Cleer simply sawed the pole at the base and carried it away.  At Trekernal a pole was fastened to the highest tree and decorated in the traditional manner. However, it was quickly taken, before dawn, by a man from North Hill, who climbed the tree with a rope and lowered the pole to the ground.

The maypoles were generally left in position throughout the month of May, and were guarded each night by the men of the village throughout the entire month. At the months end they were then taken down and stored safely until the following year.

Around 150 years ago the biggest Maypole battle to have been recorded, took place between Altarnun and Trewen.  The folk of Altarnun managed to steal the Trewen pole and this resulted in a fight where it is reported that the villagers “fought like Dragons”.The descriptions of these East Cornwall maypoles sound remarkably like the Maypole seen every year at Padstow, (above) which are very different to the maypoles decked with ribbon for dancing around.

The East Cornwall maypoles were instead bedecked with garlands and hoops of flowers. Other villages recorded as having these poles include, Berriow, Middlewood, Menheniot and North Hill. St Neot had its own version of the Maypole tradition, recorded by W. Arthur Pascoe in Old Cornwall 12, winter 1930. This was considered the most favoured of all the festivals once observed in the village. One of the last observances of this once popular custom saw one of the large farms cut a pole and raised it in the village, having much faith in their ability to defend it. However, they did not foresee such a mass attack, which they would have to repel. Amid scenes of great confusion, dire threats, the firing of shotguns into the air and discharges of hot water and pepper the St Neot pole was lost and the victors marched off with the pole on their triumphant shoulders, singing a long-lost song of maypole victory. The custom died out around 1890, but until then was firmly entrenched into the St Neot village calendar.

The greatest maypole battle celebration was centred on the village of Lanreath, and the tradition is thought to stretch back at least six hundred years, and was still going in the early 1980s, when it started to decline, due to complaints and police intervention. It was all about the virility of the young men of the village, who would steal the biggest tree from the local woods, which would be taken at the dead of night. The poles were huge, and in 1973 the maypole was recorded at 105 feet before it was stolen by the lads of Pelynt. Upon its return it was a bit shorter, and was found hidden within rows of the potato crop.

Games of skittles locally called ‘keels’were played, with the stumps (skittles), having been made from the previous year’s maypole. (See below). The battle of the maypole was often between Lanreath, Pelynt and Lerryn, and local rivalry was intense. Each village would never know who would raid who, and Doublebois and Duloe also often raided Lanreath. The maypole guard would hide in and keep watch from the churchyard, armed with sticks and one night the army arrived from Bodmin’s barracks and tried to take the pole back to Bodmin, however they were unsuccessful.

Aside from the May Pole Battles, other more sedate form of observance are also recorded from the region.  A may-pole used to be erected on West Looe Quay on the 1st May with dancing and street processions with garlands of flowers that were an art form in themselves, which processed through both East and West Looe. The May Frolics followed during the evening, where bands of young people would gather together and walk to a nearby farm.  Accompanied by a fiddler, they would dance until midnight. If the weather was foul a barn would be emptied for them, if the weather was fine a field would be used and the dances performed under a starry sky. They would dance four-handed, six-handed and eight-handed reels, riotous quick-steps followed by the more sedate Triumph and Cushion Dances, which were slow and graceful. Metheglin, Sloe and Elderberry wine would be supplied for the occasion along with junkets of cream and rich milk and ‘Whipped Syllabubs’ straight from the cow. Similar festivities were common at Fowey and Polperro.

The following poetic description of the late-night return home from the ‘May frolicks’ at Looe, can be found in the Old Cornwall Journal, Summer 1930 –

One can picture the happy party returning from Hay Farm, each with a lantern, keeping very close together as they turned the corner of Hay Lane, and the trill that shook them as they glanced apprehensively toward Plaidy, fearing they might catch a glimpse of the Phantom Horsemen careering across the beach on his ghostly headless steed. To keep up their courage they would lustily troll a catch, and the “dug-dug” of the maidens’ red-eared festal clogs would be a gentle accompaniment.