Spirit Chaser: The Quest for Bega, 10 years on 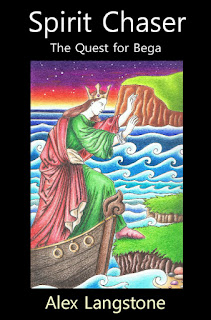 21st of June, 2012, saw the publication of my psychic questing work, Spirit Chaser. This paperback tells the story of my very personal interaction with the folklore, mystery and history of an obscure Irish saint called Bega and of the land that she inhabited 1,400 years ago.

Many readers of my more recent folklore works, may be surprised to know that my first full length book was about my experiences out in the landscape, where I was able to fully immerse myself in the hidden realms of Nature and interact with the Genius Loci at the centre of the British Isles.

According to the concept of psychogeography, the idea of something as mundane as a walk can be expanded and constituted through a conscious contemplation of both place and walker’s relationship with it. This can be both deepened and expanded through psychic interactions with layers of story, lore and myth, where it somehow morphs into a kind of 'occult topography', which seems be a more descriptive term for this type of practice.

Spirit Chaser tells the story of my very own attempt at this type of  interaction. At the beginning of 1989, I started having a longing to return to the Cumbrian fells. I had no real motive, apart from some remote and brief childhood memories of a 1970s family holiday, where vast lakes and high waterfalls had imprinted somewhere in my consciousness. I was 24 years old and I was interested in paranormal phenomena, folklore, earth mysteries and the practice of witchcraft and neopaganism. I was also involved in the countercultural, cultish and liminal world of psychic questing. With all of this floating around my psyche, looking back it was inevitable that I would end up on a spiritual adventure of discovery and pilgrimage, which incorporated many, if not all of the above interests. The nostalgic spectre of it all is now very apparent, and the interaction with the 'Genius Loci' - that elusive polytheistic and animistic spirit of place has become commonplace in all the more creative areas in my life. For this is when magic happens, at the point where we begin to connect.

If I were to write Spirit Chaser now, it would have undoubtedly been written very differently. However, as with all writers' work, it has become a snapshot of my life, frozen in time.

Here is the back cover blurb: 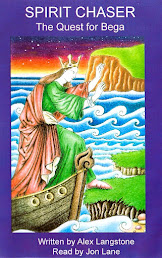 This is the true story of a psychic quest that turned into an uplifting spiritual pilgrimage.  In June 1989, the author began following a series of psychic messages and significant synchronicity that led him to discover the enigmatic mystery of St Bega, the sacredness of the British landscape and ultimately to experience the divine reality of the Celtic tradition of mysticism, miracles and magic.

Spirit Chaser takes us on a magnificent journey, a journey into the twilight past of seventh century Britain and Ireland. A journey into the heart of a modern day quest for the mystery that is the Sancta Bega; the sacred ring at the mystical centre of the British Isles.

The book is available as a paperback here. You can also listen to it on audio CD here and via Audible here. (Audio versions narrated by Jon Lane, and produced by Circle of Spears Productions).

In 2014 we published a limited edition hardback edition, celebrating 25  years since the beginning of the quest. There were only 30 copies produced. We now have only 2 left, and they are available here